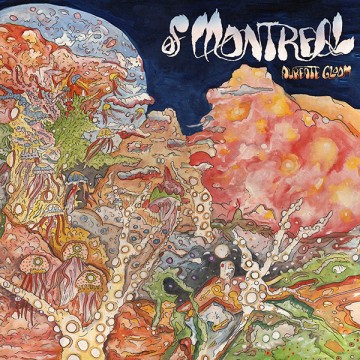 Another year, another of Montreal release. Another smattering of discord psychedelic-funk-glam-breakbeat tracks that fascinate and confound in equal measure, with catchy melodies, sing-along hooks and bewildering pop experimentation.

For Aureate Gloom, Kevin Barnes took up residence in New York City in the wake of his separation from his wife and found his inspiration by walking the streets and imagining the soul of the city circa 1975. This comes through as clearly as any of Barnes’ recent driving influences. The band’s releases have often suffered from a kitchen-sink disorder. Too much inspiration, not enough focus. The band’s 2013 recordLlousy With Sylvianbriar found a convenient resting place where Barnes’ self-absorption took a backseat to musicality. The pop melodies eased into a mellow manic-depression where listeners could take solace in a return to accessibility and precision not heard since 2007’s Hissing Fauna, Are You The Destroyer?

The best of Montreal tracks remain the most rudimentary (it’s all relative). “Bassem Sabry,” the lead single from Aureate Gloom, thumps and bumps along a slick groove that bridges the gap between psychedelica and disco. Overall, however, Aureate Gloom takes a half-step back toward aural assault with discord, vocals and music in conflict. Barnes revels in a squalid vocal that competes for supremacy with a pleasant backing jam comprised of riffs on commonplace pop music. For example, 2012’s Paralytic Stalks found Barnes sonically assaulting some Princely funk laced with electronic and vocal asynchrony, but the result proved grating and occasionally off-putting, but also intermittently brilliant. So it goes with of Montreal.

Most of Aureate Gloom wallows into the seeds of the New York punk scene. Take some Richard Hell and the Voidoids, toss it with some of The Mumps and The Ramones, and drizzle with ‘60s pop vocals. “Monolithic Egress” thus serves as a poster child for the record. Raging guitar segues into dreamy psychedelica and back again. The lackadaisical outlier “Aluminum Crown” most resembles anything from Lousy With Sylvianbriar, but Barnes has again dared the listener to blink first. Where does musicality fit into the juxtaposition of beauty and ugliness?

Identifying with Barnes’ groove du jour always proves to be a hit-or-miss endeavor, producing respect and admiration more often than love or hate. Track by track, there’s something to enjoy and something to confound. Listening to of Montreal on Aureate Gloom once again takes the form of an intellectual exercise rather than visceral enjoyment. Find the pulse, focus on the jams and let the rest of Barnes’ vision fall into place. Maybe it does… but is it still worth the effort? Yes. But that’s a far too straightforward answer than any of Montreal record deserves.

James David Patrick has a B.A. in film studies from Emory University, an M.F.A in Creative Writing from the University of Southern Maine, and an honorary Ph.D. in bullshitting about everything else from the College of Two Pints. His fiction and non-fiction has appeared in PANK, Monkeybicycle, Squalorly, Specter Lit, and Bartleby Snopes among other wordy magazines. While he does not like to brag (much), he has interviewed Tom Hanks and is pretty sure you haven't. He bl-gs about music, movies, and nostalgia at thirtyhertzrumble.com and runs the James Bond Social Media Project at thejamesbondsocialmediaproject.com. James lives in Pittsburgh, PA.
RELATED ARTICLES
album reviewsof montreal
8.0