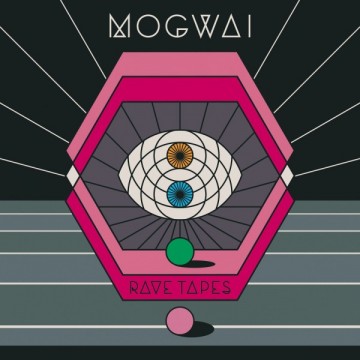 Since they first introduced Mogwai Young Team to the world, this band has made the listening experience in itself an art form. With droning synths, creepy crescendos, and heartbeat drum thumps, Mogwai’s eighth studio album, Rave Tapes, upholds their distinctive sound.

Our go-to, instrumental music Scotsmen prove that their sound can still be fluid with the times, but will never deter from true post-rock. After working on the creepy, ambient soundtrack of the French show Les Revenants, there are a lot of influences that could be found in Rave Tapes. There’s cinematic narrative to be found in songs like “Deesh” and the album’s first single “Remurdered”– they create suspense with dynamics moving from each end of the spectrum. Later into “Remurdered”, Barry Burns’ new synth kicks in at a heavier pace and one soon understands the ironic title of the album (they haven’t really gone electronic).

The beauty of tracks like “Hexon Bogon” and “Heard About You Last Night” could only have been made possible by the originality of the guitar riffs that uphold it. I mean, it’s also nothing without everything else, but what long-time Mogwai fans can all agree to nerd out about is definitely the power the guitar has to completely change the ambience and feel of a song. Expect no vocals until “Blues Hour”, a soft ballad that moves slowly from heartfelt piano melodies to guitar fuzz, and then back to piano. “The Lord Is Out Of Control” brings autotune vocals into the realm of steady paced rhythm. The dynamics formula is what makes Rave Tapes so intriguing, and is what ultimately keeps the listener hooked.

If you were looking for any samples, “Repelish” includes a spoken word dialogue from “a Christian radio talk show guy” according to Mogwai in an interview with Pop Matters. The sample rants on about pseudo-Satanic messages in Zeppelin’s “Stairway To Heaven” when played in reverse.

But one thing Mogwai can’t reverse is their long, successful journey as a band. They have a musical formula you can’t beat.

The Spill Magazine is a Toronto-based online publication dedicated to covering the independent music scene with a strong focus on our thriving hometown talent. Our writers bring you up-to-date news, in-depth features on musicians and reviews for the latest CD releases. We also travel to the front lines for all local festivals including Canadian Music Week and North by Northeast. Don’t forget to check out our Facebook and Twitter pages for all daily Spill updates.
RELATED ARTICLES
album reviewsmogwai
9.0