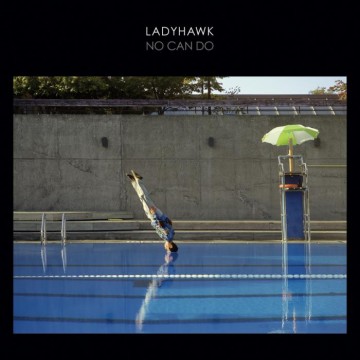 Ladyhawk
No Can Do
Triple Crown Audio Recordings

The opening tracks of Ladyhawk’s No Can Do, “Footprints,” “I’m a Witch” and “No Can Do,” are rather strong and catchy tunes that get the album going with a strong start. After these three songs the listener is ready for more greatness – however the music starts to head down a path of predictably bland Indie Rock. The kind of sound that’s a dime a dozen these days. Droning guitars, tambourines, lazy vocals, and mediocre songwriting – it isn’t something that’s exciting right now.

There is merit to this release as the band surely possesses significant musical talent. No Can Do is definitely worth a spin, I just wished Ladyhawk would have put more thought into the writing and production since they went with what sounds like quick and dirty production. Lo-fi is no longer the “it” format for producing records as it was during the first decade of the 2000’s. Bands have to once again step it up in all categories if they want to compete. If a band wants to go Lo-fi, their songs have to be out of this world, and Ladyhawk fell short in this department. I will certainly give their next release a spin, but No Can Do will just get filed with the massive stack of OK Indie Rock.

On a positive note, the cover art contains one of the best photos I’ve seen in a long time, check it out and you’ll see what I mean.

Here's what we think...
Spill Rating
Fan Rating
Rate Here
New Criteria
5.0
8.5
2.5
Total Spill Rating
8.5
Total Fan Rating
1 rating
You have rated this
Album Reviews
album reviewsladyhawkno can do
album reviews, ladyhawk, no can do
About the Author
Andre Skinner