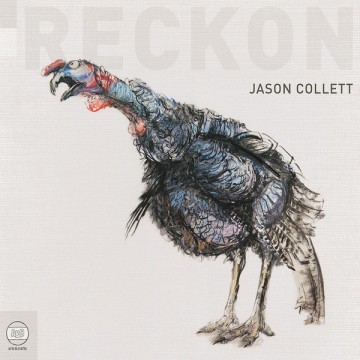 Jason Collett keeps turning out amazing songs regardless of his high-profile as one of the lead members of Broken Social Scene. The impressive opening song, “Pacific Blue,” immediately gets your attention with its sweet and precise acoustic finger picking followed by great vocals and a well-realized orchestra string section. This first single sets the table nicely for a great release.

After years as a tradesman and part time musician, Collette was finally able to part with his day job as a cabinet maker and make the jump to being a fulltime musician around 2006 after the release of Idols of Exile. There was no question this was going to be a reality for Mr. Collett and he has certainly stepped up to prove he’s worthy of all the praise and the hard-earned career.

As I get through this album on my sixth spin the tunes start to sink in. High praise can be given to the following tracks: “I Wanna Rob a Bank,” a fun and catchy tune that depicts a man who’s clearly had enough and just wants to rob a bank, it brings thoughts of retro action cop & robber films from the ’70s and ’80s, it grooves hard and is totally danceable; “Miss Canada,” a song telling tales of a woman who went west to Fort McMurray to make a living as a prostitute, a strong ballad with a chorus that’ll have you humming all day; “Black Diamond Girl,” a short but impactful tune that runs just under two-minutes and kicks you in the teeth with the full band at the 1:07-mark and keeps you tuned in for more.

One of the best songs from Reckon is “Where Things go Wrong,” which quickly strikes a nerve and shows deep passions in Collett’s songwriting, it’s a slow burn that could easily bring a tear or two and stop you dead in your tracks.

Andre has been writing for The Spill Magazine for over 12 years, dating back to the print days. His passion for music goes far beyond writing reviews for new music and live concerts, he is also an active musician and producer on the Canadian music scene. Having toured North America and Europe with various acts, he is no stranger to dedication and work ethic new bands must endure to make the grade in today's market; Andre always delivers perspective writing that is authentic and to the point. Mr. Skinner typically covers indie rock, grass roots, electronica and is our resident hard rock and heavy metal specialist. He is extremely selective on what bands he covers for articles and you can rest assured they are ALWAYS band to watch with something left of centre to offer.
RELATED ARTICLES
album reviewsjason collett
8.0