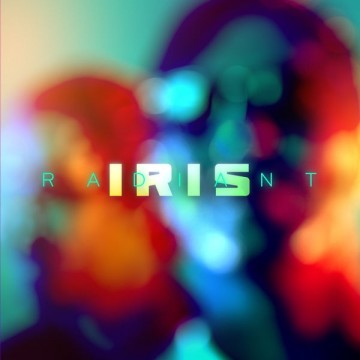 No one likes to badmouth people when they argue, break up, and get back together – but Reagan Jones’ and Andrew Sega’s reconnection and subsequent collaboration on the album Radiant produces a largely forgettable collection of electronic pop songs save for some promising pieces such as “Sound Becomes Waves.”

Iris began as a Texas duo consisting of Reagan Jones and Matt Morris and in 2000, and was declared “best band” and “best album “ at the American Synthpop Awards. The current combination of Jones and Sega produced three albums, the last being titled Blacklight in 2010. An argument after their supporting tour of Blacklight led to the band members not speaking to each other for a year. Perhaps the time apart has mellowed Sega and Jones. Whereas Blacklight had an edgier, gritty feel, much of Radiant seems docile and resigned – as if they were thinking, “Let’s play nice together and not rock the boat.” The first half of the album features songs that blend too similarly with each other. However, the second half picks up the pace with stronger tracks such as “Rewired” and “Sight Unseen.” Everyone needs time to work out issues between each other, and Radiant may prove Jones and Sega are on the right path.

An educator who also tries to introduce others to great music. It's a never ending job.
RELATED ARTICLES
album reviewsiris
8.0