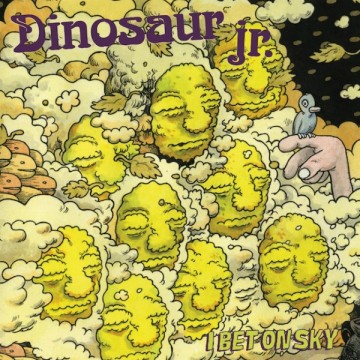 I Bet On Sky is Dinosaur Jr.’s third album by the reunited original line-up of J Mascis, Lou Barlow and Murph. Opening track “Don’t Pretend You Didn’t Know” includes some unexpected synthesizer and a piano melody that comes in mid-song. Classic Dinosaur Jr. elements are still there with Mascis’ ragged croons, and heartfelt whines, comforted by falsetto backing vocals and tremolo-picked guitars. You have to wait until the second track, “Watch the Corners,” to hear the full Dinosaur Jr. sound complete with wailing guitar solos.

Some of the songs have repetitive guitar riffs and vocals that can’t sustain interest for their full length. The repetition works better on the shorter track “Pierce the Morning Rain,” even though the rhythm and guitar riff remind me of the “Name Game” song.

Barlow’s Grunge-pop tune “Rude” is a refreshing change mid-album. Unfortunately Barlow’s other song, “Recognition,” sounds a lot like a Queens of the Stone Age song with a J Mascis guitar solo thrown in.

The album ends with one of the best and longest tracks, “See It On Your Side,” featuring exuberant Neil Young inspired guitar solos throughout, and ending with one solo over two minutes long.

I Bet On Sky is comparable in sound to Dinosaur Jr’s last two albums Beyond (2007) and Farm (2009), although the songs are not as strong. The weaker cuts are redeemed by the guitar solos. This album is a little more subdued than their previous ones, but overall it will not surprise or disappoint fans.