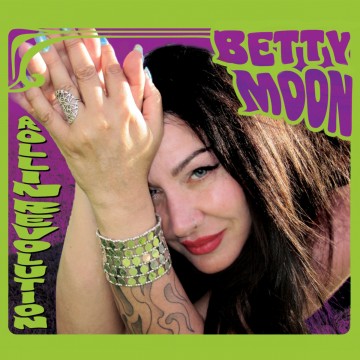 Betty Moon is back with Rollin Revolution, a smoking hot album bustling with attitude and roaring energy. Moon, a Toronto native who now calls Los Angeles home, can boast a string of albums to her credit (her second album Stir [2006] has been compared to Alice in Chains and Black Sabbath), performed at the prestigious Sunset Strip Music Festival with heavy hitters such as Marilyn Manson and The Offspring, and has had her songs appear in films and television.

“Stupid Dream,” the first single from the new disc has already garnered much deserved attention on KROQ Radio in Los Angeles, while the new single, “The Elegy,” which by dictionary definition is “a sad or mournful musical composition,” stands out with a dreamy tone and for its melancholy beauty. Moon’s strong vocal range displays itself throughout the album; from hitting the high notes in the defiant opener “Captain Hi-Top,” to coming at you with a screaming intro in “Trouble Loves Me,” to the sultry delivery of “Drink Your Fears Away.”

Rollin Revolution is marked by a diverse mix of melodies produced by the keyboards and gripping guitar solos, with lyrics that speak of Moon’s personal experiences. A host of key musicians such as Yogi Lonich (Chris Cornell, Buck Cherry), Dave Adams from Toronto and Scott Warren (Type-O Negative) came on board to lend their talents. Other personal favourites include “C4 Yourself” and the fantastic title track that rocks out with pumped up drums and biting guitars.

This smokin’ hot record will open up your ears and force you to notice. Warning: Music will become addictive.