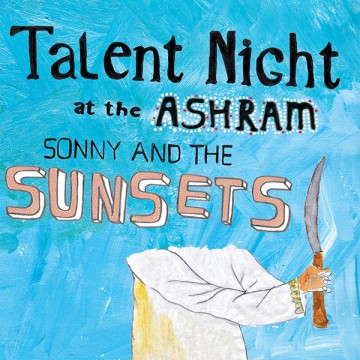 Sonny & The Sunsets
Talent Night At The Ashram
Polyvinyl Records

If you didn’t know it, you would never guess San Francisco native Sonny Smith is nearing his mid-40s. Imaginative, quirky, and possessing the ability to spin stories akin to a young child full of wonder, this latest album showcases all that we’ve grown to love about Sonny & his band of merry pranksters, The Sunsets, over the past five years. Talent Night At The Ashram takes listeners on a musical trip (albeit a disjointed one at times) through daily life.

This album was initially envisioned as a compilation of short films that would be edited together into a full-length feature. As Smith was filming the videos, however, his concept never quite came to fruition and what emerged instead was an album full of little vignettes and ideas.

As he was writing the scripts and hiring the actors (even shooting a few of the clips), the scripts began to morph into songs. Are the spoken word clips really candid talk during recording, or are we fully buying into the story as we would if this were a movie we were watching, or a book we were reading?

On album opener “The Application,” Smith applies to be a human being (“I filled out the application to be a man”) with harmonies reminiscent of The Beach Boys, if a bit slower and sleepier.

“Happy Carrot Health Food Store” is one long (seven minutes) folk-rock descent down the rabbit hole. Presumably written about characters you find at your local Whole Foods Market, it then takes a sharp right into a conversation between Smith and his dog. While you expect the dog to respond humanly, as Smith is speaking to him as though he will, the dog just barks and then just as oddly, the artist tells the dog, “What, well, I’m going to swallow you,” because the dog is suddenly inside the beer Smith is drinking. Of course he is. Perhaps Wayne in the produce department could explain this better. After all, we’re told he’s got all the answers.

Listening to this album makes you think about why and how we listen to music. Is it to feel a certain feeling? Get away from feeling a certain feeling? Are you someone that likes to drive and zone out to music? This is not one of those albums. I’m not sure you can simply sit down and listen to it from beginning to end in any specific situation. It’s not background party music, it’s not ‘listen while you work’ music. But taken in bits, it’s fun and silly and while I don’t think it will force you out of your seat, it’s different and interesting and worth a listen. Over a few days.

The Oscars taught us it’s okay to “stay weird, stay different;” that we’re not alone; to embrace who we truly are; and to not worry about what anyone else thinks. Within minutes of Graham Moore reassuring us it’s okay to be ourselves, his words were trending on Twitter. While it’s unlikely Smith was sitting at home watching the awards, he certainly fully embraces his quirk; perhaps that is the final message to be gleaned from this album. Perhaps each of us can find ourselves in one of the characters depicted in Talent Night at the Ashram, be it a conspiratorial lover, or Erin at the health food store…but whoever we are, I think Sonny wants us to just go with it.