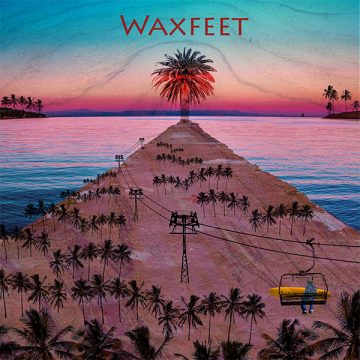 Back in the late ‘90s and the beginning of the 2000s, those lucky enough to catch the brief run of Alan McGee’s Poptones label were able to marvel the musical wonders that were gnac and The Montgolfier Brothers, both the products of one Mark Tranmer, who was able to channel through those incarnations some truly imaginative, unstereotypical, chill music, that defied the genre as such.

Some 20 years on comes Waxfeet. The pseudonym belongs to a musician that was active on the Minneapolis music scene back in the late ‘70s, who moved to Santa Cruz, California, where he incorporated co-producer Patrick Brede as part of the project.

No wonder they operate under the name Waxfeet, a name derived from surf terminology. Their grooves, or whatever you want to call this combination of practically everything that falls under the term mellow, essentially does start somewhere where piano melodies, Bossa Nova, and Brian Wilson’s instrumentals. Waxfeet are at the forefront of new and adventurous. They just add touches of blurred electronica to the mix to come up with something really special and extraordinary.

Although it is only a three-track EP, these are three tracks that keep playing with your mind with ease, promising exquisite stuff yet to come.

Formerly a lot of things, including a journalist and a translator, currently a freelance writer living in The Netherlands.
RELATED ARTICLES
album reviewalbum reviewsdream
8.0