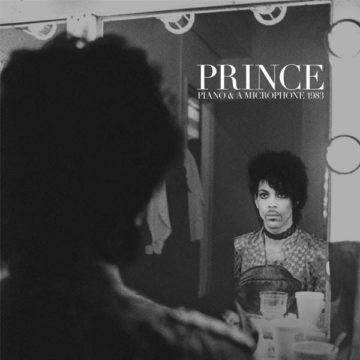 Since the tragic passing of Prince on April 21, 2016, the Prince estate has slowly begun releasing new material from the artist’s fabled – and quite literal –vault of unreleased music. For decades, fans, the media, and even peers of the legendary musician have wondered what is in the vault. While throughout his career, Prince was occasionally known to scoop unreleased material from the vault when he needed an additional track of an album, it has long been considered to be a true time capsule of not only demos, live tapes – from concerts, his frequent after party jams, and his studio – and finished songs; however, since his passing, his estate has confirmed that the vault has enough completed material to release a full album once a year, for at least the next century. As a result, Piano & A Microphone 1983 is the first completed collection to emerge. The nine track album – running at a modest thirty-five minutes – captures Prince at what is likely the most vulnerable and intimate he has ever been on record as he rehearses for an upcoming tour, just him singing while accompanying himself on a grand piano.

“Is that my echo?” Prince asks the engineer as he sits down at the piano to play the bluesy piano intro for “17 Days”. “Turn the lights down” he says before he begins to sing with a soft, warm, and slightly breathy voice. As he continues through the song, he asks the engineer to turn his vocals down through his monitor. While this wasn’t the intention when these recordings were put to tape, Prince has immediately set the stage for one of the most intimate albums ever. Quite similar to what would be Prince’s final tour, the spontaneous Piano & A Microphone Tour of 2016, it is clear that while Prince is rehearsing, he is completely indulging his own musical ambitions and freedom as he hammers out an excellent solo, and embellishing the well-established melodic ideas. The connection between Piano & A Microphone – the album and the tour – continues as Prince plays only a minute and a half of “Purple Rain” before seamlessly transitioning into Joni Mitchell’s “A Case Of You”, and then again shifting into a dirty blues shuffle over the classic proto-Gospel “Mary Don’t You Weep” – with the former taking a jazzier and even more organic spin as opposed to that of the power-ballad tone of original recording and with the latter being one of the strongest performances on the album.

It seems that Piano & A Microphone 1983 was recorded in one clean take, front to back. While this is incredibly impressive, Prince was known for doing just that. What is perhaps most intriguing about the album is that it acts as one of the few chances to peak behind the curtain at the sheer genius, pure creativity, and bare soul of Prince and his artistry. Not only is he vamping on the piano with the skill and natural improvisation like some of the best jazz and blues musicians, but you can hear him hum certain vocal refrains and alternative melodies. It’s like watching Picasso scribble out a quick sketch on the side whilst already crafting Guernica, only Prince is figuring where he can take what was already written and recorded and bring it to life in a live setting with a different reinterpretation. Again, this is something Prince was known for doing – if you saw him live or watched any of his videos, it was quite clear – but to witness this as a process is something that is truly magical.

Piano & A Microphone 1983 goes on to include well known works such as “International Lover” and an alternative version of “Strange Relationship” (which would not be released until 1987’s Sign ‘O’ The Times). It also includes three never before released songs, the gentle ballad “Wednesday”, the brisk and bouncing “Cold Coffee & Cocaine”, and the emotional closing track, “Why The Butterflies”.

Piano & A Microphone 1983 is phenomenal; an absolute must hear for any one while an essential piece for the lifelong Prince collectors. That being said, however, with its short run-time, I feel as though the estate is holding back on what could have been a much fuller album. That being said, I also feel torn between wanting more material from Prince – I have forever memorialized his music and life with a tattoo on my arm, after all – but there is also the ethical matter of releasing work from Prince’s vault that leaves me, and I’m sure many other fans, feeling like an unwanted voyeur – Prince was known to joke about destroying the vault and all of its contents when he got older. Morals aside, however, Piano & A Microphone 1983 is absolutely breathtaking. It is a true piece of art that reflects that Prince, even while rehearsing, could make a better album than some of the well though-out and planned records. I stand by my claims that Piano & A Microphone 1983 is a masterpiece that is among the best records of the year, and beyond.

A passion for music has always been a part of Gerrod’s life. As a young boy, he was raised on a steady diet of the music from The Chili Peppers, Aerosmith, The Stones, Prince, and others from his mum. Raised in the GTA, Gerrod continued to foster his love for music by attending a wide range of concerts and learning the drums. His unapologetic passion for music has no bounds and has spread to a wide variety of styles, whether it be the 90’s rock that sound tracked his teenage years, the jazz he studied in university, or his newfound love for hip-hop. He recently received his bachelors in music and education from York University and is passionate about writing and reviewing good (and less than good) music. Gerrod is also the drummer and songwriter for a Toronto based rock & roll band, One In The Chamber.
RELATED ARTICLES
album reviewalbum reviewsprince
7.0