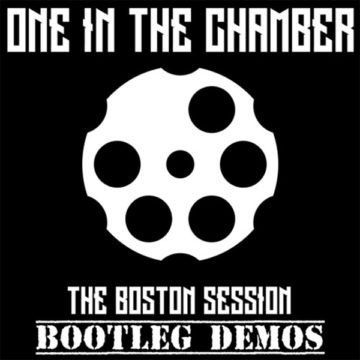 One In The Chamber
The Boston Session: Bootleg Demos
Independent

This EP was released the same day as their debut live album, Live From The Rockpile. One in The Chamber is a Toronto based band who went to Boston to record with Scott LaFlamme (Bang Tango) and over five days this band recorded some demos, five of which are released on this EP.

The band is made up of Mike Biase (lead vocals and guitar); Cecil Eugene (lead guitar and backing vocals); Christian Dotto (bass) and Gerrod Harris (drums and backing vocals). They have been gigging around Toronto and Southern Ontario for some time and made the decision to work the famed LMI Studios in Massachusetts owned by LaFlamme (Dreamkiller recorded there).

LaFlamme gets the best out of this band and I am curious why this is labelled as demos. The songs speak for themselves and sound perfect the way they are presented. It is hard to imagine the songs being improved from these early forms.

This is a tight, rocking band. They owe a great deal to the heavy metal artists of 1980’s and they wear this on their sleeve. But even in a rather short EP, the band presents that they are more than just a rocking outfit.  One of the highlights off the EP is the ‘ballad’ “Just For Tonight”.  This is not the standard ballad one expects from a heavy metal band, but rather an interesting mix of harmonies and instrumentation that produces an overall edgy sound.

This is the strength of this band, they are not afraid to infuse different sounds and genres into their heavy sound. One hears grunge at times, and at other times there is a tip of the hat to the 1970’s hard rockers.

It is interesting that they decided to release two albums the same day. They are both worth your time. What both releases do, especially this EP is give an indication of what the band is capable of. One In The Chamber is a talented group, with excellent playing and strong vocals. With the right producer these guys could blow the roof off their career.

The Boston Session: The Bootleg Demos is a great start for this band.  I look forward to more music from them, but in the meantime we have this and Live From The Rockpile.

Born and raised in Whitby, Aaron discovered music through his love of The Beatles. This led to a career in radio, writing for various publications, and ultimately a radio show about The Beatles (Beatles Universe), which ran for over four years. When not immersed in music, Aaron enjoys spending time with the loves of his life -- his wife Andrea, and daughters Emily and Linda (all of whom have an intense love of music too).
RELATED ARTICLES
album reviewsjust for tonightlive from the rockpile
8.0