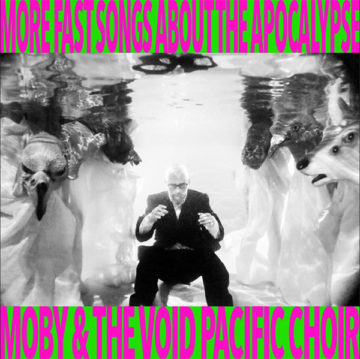 The genius of Moby is that you just never know what is going to come out of your speakers when you put on any album he releases. More Fast Songs About The Apocalypse is his 14th studio album, it is also the second album with the group The Void Pacific Choir. This album picks up where the last album, The Systems Are Failing (2016) left off. It picks up lyrically, but not so much musically.

On More Fast Songs About The Apocalypse, Moby returns to an electro-punk sound. It is a hard and heavy album. This is Moby being more political, and in some regards more radical since his 1996 album, Animal Rights.

In fact there are times when I got the feeling I was listening to an old Gary Numan and The Tubeway Army album, circa, 1979. This is not meant as a criticism. It is to Moby’s credit that he dips into the past to sing about today’s problems. Listen to “There’s Nothing Wrong With The World There’s Something Wrong With Me” for an example.  A beautiful melody, relentless beat, and Moby sounds like Numan. And it all works.

Lyrically the album is exactly as the title suggests, More Fast Songs About The Apocalypse. Moby may use a bit of humour to get his point across (the title made me smile, to be honest), but the album is quite serious. ‘I’ve looked so hard for a Savior,’ Moby sings in “In This Cold Place”. ‘But then, there’s nothing left to save.’  The songs are dark, but with incredible melodies. Perhaps, some of the best songs Moby has written.

Credit must be given to his band, The Void Pacific Choir who provide the musical back-up for Moby whohas been known to do everything himself, so working with a band is a little different for Moby, but it seems to be the driving force behind the new music he is creating. Mindy Jones, Julie Mintz, Jonathan Nesvadba, Joel Nesvadba, Jamie Drake and Lauren Tyler Scott all contribute to the sound of the album.  Mindy Jones, who sings with Moby adds a whole new layer to the sound.

This is a brilliant album, far too short, but well worth listening to.  More Fast Songs About The Apocalypse will be considered a classic in years to come, and may be hard for Moby to top, but something tells me, he is up to the challenge. Judging from this album, he has a great deal to say, and creative ways to express himself.

Born and raised in Whitby, Aaron discovered music through his love of The Beatles. This led to a career in radio, writing for various publications, and ultimately a radio show about The Beatles (Beatles Universe), which ran for over four years. When not immersed in music, Aaron enjoys spending time with the loves of his life -- his wife Andrea, and daughters Emily and Linda (all of whom have an intense love of music too).
RELATED ARTICLES
album reviewsmobymute records
8.0