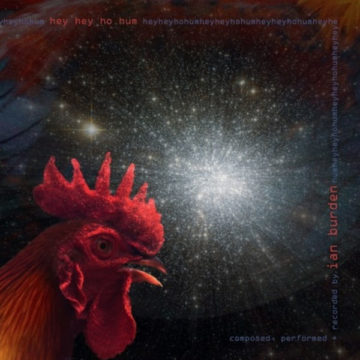 Ian Burden was a member of The Human League from 1980 until he left the band in 1987. Hey Hey Ho Hum is his second solo album (his debut solo album, Loot!, was released in 1990). Since then he has worked with Parralox, The Tenth Stage, and other session work. Hey Hey Ho Hum, however, is his album. He wrote, produced, recorded and plays everything on the album. And, it was well worth the wait. Ian Burden has returned!

The album is a concept album, and plays as an orchestral suite. There is no break between songs, and the CD is mastered as one track. This means, it is an album that must be listened to from beginning to end. The listener is rewarded, as these songs are not only melodic but beautifully structured. Sure there is a lot of programming and synths, but the album has a warmth and intimacy that is seldom heard on a synth based album.

Hey Hey Ho Hum plays like a song cycle. There are recurring themes in the lyrics (“Hey hey ho” is repeated in various manners throughout the album) and in the music. It is an intelligent, well thought out, and extremely well produced album. Although it is synth based, this album is more akin to Pink Floyd or Bowie than the 1980s synth-pop music.

Burden creates a soundscape with Hey Hey Ho Hum, he layers sound and uses song transitions to create mood, feeling and emotion. The lyrics are there, but the music moves the album along. Listen to “Where To Start”, with its ominous opening. One is not quite sure why they should be a little worried, but the music indicates something wicked this way comes.

Lyrically Burden writes about alienation in this new world in which he finds in himself “Trapped in to the cities, claustrophobia” he sings in the chorus of “Big Big World”. He comes back to these themes but he also addresses the confusion such conditions create. “String it all together, take it all apart. Who knows where to start,” he sings in “Where To Start”.

The album concludes with “Thy Kingdom”. A suitable ending to the album, with Burden stating “I’m trying to find another way” before he retreats to “Hey ho” as the song fades. A dramatic and almost chilling conclusion to a brilliant album.

Hey Hey Ho Hum is a brilliant album. An album that is best enjoyed in order from start to finish. It is not long, and flows quickly. Burden is a talented musician. He also is a brilliant producer. He manipulates sound and uses his musical tools in very interesting ways. While he does all of this, he does not lose the melody or the focus of the album, even for one second. Every sound is well placed throughout Hey Hey Ho Hum and the accompanying lyrics fit perfectly. Hey Hey Ho Hum is a work of art.

Born and raised in Whitby, Aaron discovered music through his love of The Beatles. This led to a career in radio, writing for various publications, and ultimately a radio show about The Beatles (Beatles Universe), which ran for over four years. When not immersed in music, Aaron enjoys spending time with the loves of his life -- his wife Andrea, and daughters Emily and Linda (all of whom have an intense love of music too).
RELATED ARTICLES
album reviewalbum reviewshey hey ho hum
8.0