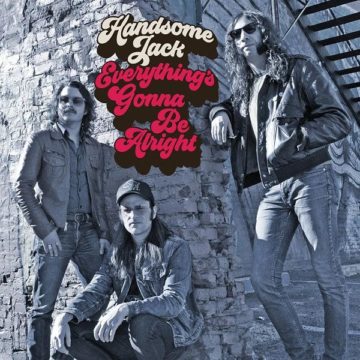 Handsome Jack is a blues rock trio from upstate New York and while their city of Lockport may be known more for the Erie Canal running through its center rather than sporting a rich swampy blues music scene, one might be entirely convinced of the latter. With an authentic and confident musical swagger that doesn’t sound like a forced carbon copy of a tried and true style, Handsome Jack still have their influences respectfully in place but have honed their craft to a personal fine point.

Their third album titled Everything’s Gonna Be Alright, shows a band who can adapt to change and only get better for it. Having whittled down to a three-piece and with the adept Bennie Hayes taking over drum duties, this slimmed down Handsome Jack sound rawer and more immediate than ever.

Frontman Jamison Passuite effortlessly taps deep into the grizzled old blues guy with barbed wire shredded vocals while the smooth as glass bass and bright snap of drums keep it classy….and that guitar, holy hell that filthy guitar! Indeed, this is some fine power blues, but it is their diversity that sets the band apart. For instance, there is a point in “Baby Be Cool” where the flash of horns kicks in and it’s almost a shock to the senses because you’ve already gotten deep down bluesy, but then this brass hits you between the eyes like a shot of Motown. Or take “Why Do I Love You the Way I Do” which is leaner in sound and could easily be mistaken for an old Stax catalogue soul B-side. It’s a gem of a tune that once again showcases a band willing to take a few fun risks in their delivery.

Whether riding a Black Crowes slipstream, slipping on a whisky-soaked Creedence bender, or simply powering through some straight up loud raunchy blues rock, Handsome Jack continues to grow and impress with Everything’s Gonna Be Alright. If “Boogie blues” is your bag than you absolutely want this album in heavy rotation.

It took the recommendation of a best friend to get me into the pages of music magazine writing. Armed with the deepest appreciation for all the music, a ridiculous sense of humour, and the apparent ability to string a few words together, these fingers started giving. Who knew it would become one of my favourite things many years later and that I'd enjoy seeing my works published the world over?!
RELATED ARTICLES
album reviewalbum reviewsalive naturalsound records
8.0