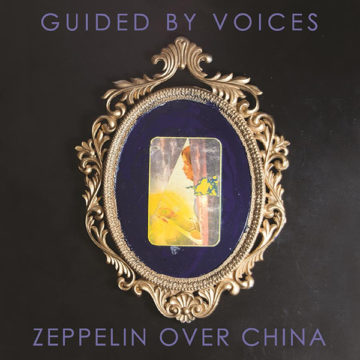 It seems like a wonderful time to be a Guided by Voices fan. Since 2016, kingpin Robert Pollard has been joined by longtime members Doug Gillard and Kevin March, alongside relative newcomers in terms of the band’s chronology, Mark Shue and Bobby Bare Jr. They tour regularly, don’t appear to hate one another, and (aided by engineer Travis Harrison) consistently release new material to well-deserved acclaim. With the release of Zeppelin Over China, the band’s fourth album in three years, has Guided by Voices entered its Renaissance period?

Consisting of 32 tracks, Zeppelin Over China offers the same bang-for-your-buck ambition displayed on August by Cake, the debut of the band’s current lineup. The scale of the latest effort is dizzying, and the fact that such diversity of sound can be realized is a testament to the strength of Pollard’s team, and the level of trust he places in them. It would be easy to get lost in the wide range of styles, but the measured sequencing ensures that the whole thing sounds smooth rather than sprawling. As a result, stripped-back beauties such as “Bellicose Starling” and “Everything’s Thrilling” do not feel out of place following the episodic, three-minute rock operas, “You Own The Night” and “Jack Tell”. We are treated to a number of ambitious arrangements that expand beyond the usual weave of guitar, bass, and drums. The strings on “The Rally Boys” turn an already-triumphant song into something more majestic, and everything is thrown into the closer “Vertiginous Raft” to make sure that the listener is left pinned to the wall. Pollard’s vocal performance is particularly impressive throughout, with the one-two punch of “The Hearing Department” and “Questions of the Test” perfectly demonstrating his ability to move from tender melancholy to dreamy faux-English prog.

Zeppelin Over China is an album of contradictions. Its length is both a curse and a blessing; though initially overwhelming to digest, the album becomes an absolute treasure trove once you’ve strapped yourself in for a couple of listens. It is somehow surprising that a release from an artist with over 100 albums to their name can sound so inventive and new, but at the same time, it’s completely unsurprising and outright expected when that artist is Robert Pollard.