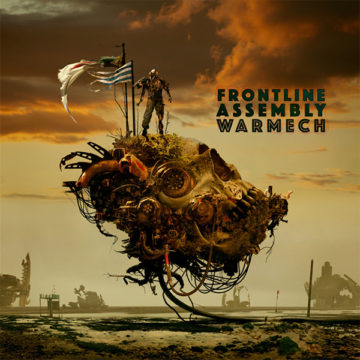 This is the first new music from Front Line Assembly since 2013’s Echogenetic, which was a  brilliant and very successful album for the band. WarMech is not a follow-up to that album, but it is a follow-up to the other video game soundtrack they recorded, AirMech in 2012. WarMech is a soundtrack, so not technically a Front Line Assembly album as such. But let’s face it, any new music from this band is reason to celebrate.

While the band differentiates between soundtracks and Front Line Assembly albums, fans may not, and for the record, this is a brilliant album. It is instrumental, so we do not get to hear Bill Leeb’s incredible vocals. While the vocals are missed, the music makes up for the lack of singing. This is intense music from beginning to the very end.

WarMech is an excellent opportunity for Front Line Assembly to show what they can do and the diverse music they are capable of making. Joining Leeb on this album are Jared Slingerland, Sasha Keevill,and  Craig Johnsen. WarMech also features the late Jeremy Inkel.         Inkel passed away on January 13, 2018. The album is dedicated to him, and in many ways it acts as a tribute. Not so much in the songs, but the chance to hear his brilliance shine through once again, perhaps for the last time.

The music is a soundtrack, which means it sets tone and mood throughout. The band is more than up for the task. The music ranges from heavy techno to ambient and all points in between. It is well produced and even without the game playing in front of you, you get a sense of the scene playing out. Songs, such as the single “Molotov” features heavy industrial sounds such that you can feel your adrenaline pumping as it plays, while others, “Arthropod” seep into your ear. Beautiful, melodic and melancholy.

Although WarMech may not be the album fans have been expecting (that album comes out in October, according to Leeb), they should and will not be disappointed. This is a band that has always done the unexpected and do not follow anyone’s rules but their own. And for that fans of Front Line Assembly should not be too surprised by the album. Fans of the video game will also dig the soundtrack and it just may open a whole new audience for the band. WarMech is brilliant and stands well beside other classic albums from Front Line Assembly.

Born and raised in Whitby, Aaron discovered music through his love of The Beatles. This led to a career in radio, writing for various publications, and ultimately a radio show about The Beatles (Beatles Universe), which ran for over four years. When not immersed in music, Aaron enjoys spending time with the loves of his life -- his wife Andrea, and daughters Emily and Linda (all of whom have an intense love of music too).
RELATED ARTICLES
album reviewalbum reviewsartoffact records
7.0