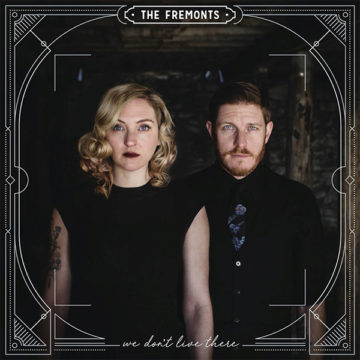 The Fremonts
We Don’t Live There
Independent

With haunting stories of contemporary American life and the compelling characters who people that landscape, The Fremonts’ debut full length We Don’t Live There has been at the top of my playlist since its release. A Boulder-based duo helmed by Stephanie Dodd (vocals/keyboard/xylophone) and Justin Badger (vocals/guitar/suitcase kick drum), their collaboration is near seamless, with a gritty, pretty style at its core. Their sound laces bluegrass, country, blues, and folk with an indie kick.

The title track speaks of fight, drive, and yearning, with the lyric “our eyes are filled with anxious heaving visions of the light… it was never our birthright to have things and no fight.” This concept resonates throughout, as though the album is asking the very real questions “How do we get to the light, to the beauty and calm we see on the horizon? How do we tame the chaos of our hearts?”  The Fremonts’ answer is to work your ass off to make your own place, and that’s exactly what they have done. They stake a claim, and they’re not giving it up.

There are songs where Justin Badger’s strong, powerful voice dominates and drives the track, such as the anti-war Tillman’s Wall, and those where Stephanie’s compassionate, merciful sound pilots the melody, with the evocative, wistful “Back to the Mountain” (my first favourite of the album). As a collaboration, this has an intense effect. Each can follow, and each can lead. Each can support, and each can be supported, neither of which is an easy task.

The country, twangy “Holding Place”, and “Tell My Mother” eloquently bring forth an experience so many women can understand, of feeling pulled between stability and a need to run free. This theme runs throughout the album, and it can’t be a coincidence for this married couple, who courted in New York, but took up house in Colorado. The duo are collaborators in every aspect of their lives, and it’s a bold move to invest all of one’s everything in another person. The result is that The Fremonts don’t hold back, and they’re not shy about it. A perusal of their joint blog, written while working on the album, shows a hard-working, impassioned partnership, and the payoff is a stellar first effort with songs that express a duality perspective, but with a strong, oneness of sound. It has all the feels of great beginnings.