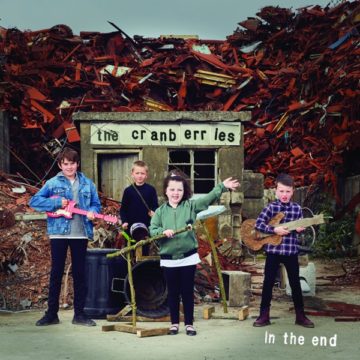 Cranberries
In The End
BMG

Many bands aspire to be timeless, but The Cranberries are one of the few to have achieved that goal. On In The End, The Cranberries have possibly delivered their finest album in their 30-year and eight-album history, despite the untimely passing of lead singer/songwriter Dolores O’Riordan in a London hotel room on January 15, 2018.

Skyrocketing to success in the ’90s with the release of their debut album, Everybody Is Doing It So Why Can’t We?, The Cranberries have sold over 40 million albums based on such alternative rock hits as “Zombie,” “Linger” and “Dreams,” but In The End may prove to be their finest album yet.

Comprised of lead singer/songwriter O’Riordan, lead guitarist Noel Hogan, bassist Mike Hogan, and drummer Fergal Lawler, In The End starts off with the rocking first single and animated video “All Over Now” and then moves seamlessly into the dramatic ballad “Lost” and then the haunting mid-tempo rocker “Wake Me When It’s Over.”

Other key cuts include the playful “Got It” and O’Riordan’s self-descriptive “Crazy Heart,” but the title and final cut on the album, “In The End,” is perhaps the most poignant song of their career, and will always remind us of O’Riordan as a talent gone too soon. As lead guitarist Noel Hogan says: “The Cranberries was the four of us. We don’t want to do this without Dolores.”

Gerry Young is President of Current Records and Management, and author of the 2011 biography Pop Goes The Weasel: Rock And Roll Off The Record, available at Indigo/Chapters, Barnes & Noble, and Amazon.com. He has recorded and managed Juno Award winning bands Martha And The Muffins and The Parachute Club among others.
RELATED ARTICLES
album reviewalbum reviewsall over now
10