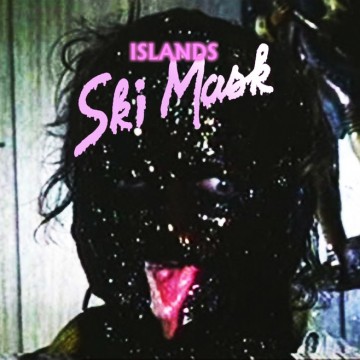 This is by far the ugliest album cover in the vast canon of popular music. It requires serious sustained effort to avoid making contact with its putrid qualities. The songs themselves, however, show a semblance of promise.

As a follow up to their 2012 release A Sleep & A Forgetting, this set of tracks leaves the listener with mixed feelings. The potential is certainly there and there is much promise for the future. As a band, Islands have recently migrated south from their Montreal home and have taken up residence in Los Angeles, California. As a band, they need maturing and distancing themselves from the Montreal scene may be exactly what they need.

Ski Mask seems to paint them correctly — or incorrectly — as a type of bland, ‘poppy-rock’ phenomena, a trend that is currently percolating all over the planet. Being part of any profitable musical scene has its advantages, but it does pose a real threat by limiting the artist’s uniqueness and creativity. Not to mention their identity.

But enough criticism. The world is filled with it, and we are no better for it.

There is a triad of songs on Ski Mask that deserve special attention. “Nil”, “Becoming a Gunship”, and “Sad Middle” are amazing. It seems the shorter the song the better it sounds. “Nil” is by far the most noticeable and memorable track. It weighs in at a puny 2:08 minutes, but it packs a mean punch. After all, who doesn’t love a great drinking song about split personalities? “Becoming a Gunship” and “Sad Middle” offer refreshing melodies and instrumentation, but the album as a whole does not have the cohesiveness necessary to secure its listen ability.

I would love to hear more from Islands in the future, but it is my sincerest hope that they search far and wide for a new art director.

Grzegorz Kieszkowski originally hails from Bydgoszcz, Poland. After his father was released from prison in 1984, for his involvement with the Solidarity movement, Greg and his family escaped to Canada in 1985. He makes Cobourg his home, along with his wife and two small children. Greg is a graduate of York University, with a double major in English and Philosophy. Music has always been in his blood, and although his tastes have matured, he will always have a soft spot for the Metal days of the late 1980’s. He is a full time English teacher and a professional photographer. Part of the allure of writing is the possibility of conversation, and he would love to hear your comments and opinions. Please feel free to visit his personal website - grzegorzkieszkowski.com.
RELATED ARTICLES
album reviewsislands
8.0