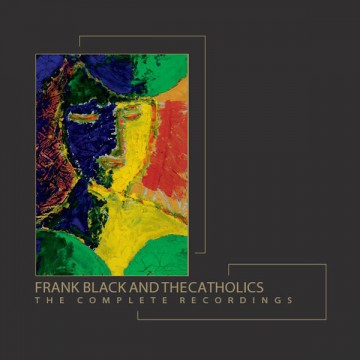 Frank Black and the Catholics
The Complete Recordings
Cooking Vinyl

Frank Black has announced a compilation album will be released for Frank Black and the Catholics. The band is considered to be an underappreciated gem in rock and roll and is quirky, sarcastic, and direct. The band was formed in 1998 after singer, songwriter, and guitarist Charles Michael Kittridge Thompson IV – or more commonly known as Frank Black – broke apart from The Pixies and tried out a solo career.

The Complete Recordings is a collection of all albums containing over one hundred songs, all of which have been remastered. There are seven CDs, including the bonus disc titled True Blue, containing demos from the Black Letter Days sessions. Unlike most albums, the songs are listed alphabetically.

While there’s the overall ‘90s hard rock sound or a folk vibe, there’s a mix of different sounds in the album, such as the playful and upbeat piano in “Are You Going My Way?” and the country sounding “Preacher’s Daughter.” The randomness of the album gives it a nice variety when listening to the album by mixing it up, rather than progressing through the different phases of the band.

Music and writing have always been a big part of Sabrina's life. She would "borrow" her dad's rock and metal CDs from his collection and listen to them while going through the art books. Although she doesn't write angsty poetry anymore, she does have a Bachelor's Degree in Journalism which she uses to pursue a creative career path. When she's not writing, Sabrina can be found juggling a coffee cup and DSLR or Instagramming her food.
RELATED ARTICLES
album reviews
7.0