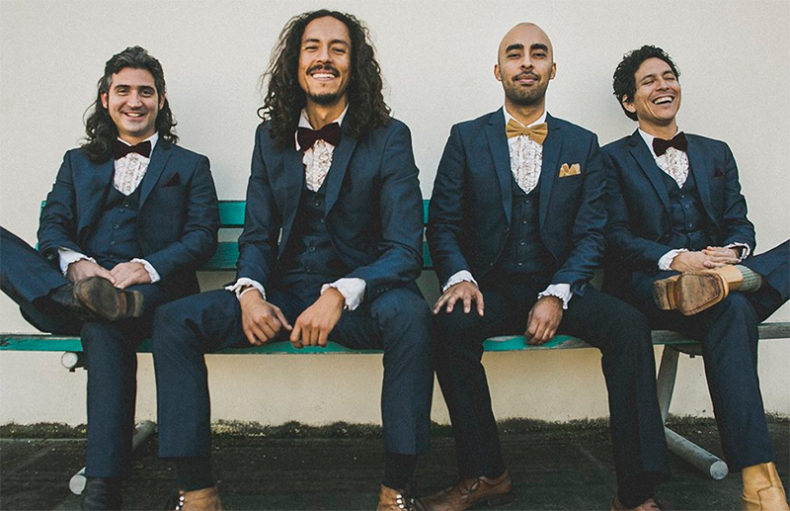 What would you get if the 1960’s Brazilian psychedelic rock group, Tropicana, reincarnated into a Chicano lounge-rock quartet? Possibly Chicano Batman, the macho tuxedo-sporting Los Angeles foursome who brought their psychedelic soul to rock Toronto’s Velvet Undergroud on April 4, 2017.  SadGirl and 79.5 opened for these Latin lounge rock stars.

Bright red lights, two female back-up singers obscured by a large hanging speaker and a sea of bobbing heads framed Chicano Batman’s set of new and old hits. The group is touring their latest album, Freedom is Free that came out to critical acclaim on LP, cassette and digital mediums on March 3, 2017 (ATO Records). Chicano Batman is finally getting noticed by Rolling Stone and New York Times and will be hitting a few summer festivals, including the 8035 Festival in Des Moines, ID where MGMT and The Shins are headlining. Their growing Canadian fan base likely envied their Toronto date, the only Canadian stop on the tour.

The group is known for their explosive performances, ridiculous lyrics and videos, such as “Black Lipstick,” and lounging, musical hooks.  NPR compared them to a 1976 prom band for their signature “puffy tuxedos”. Unfortunately the sound sadly obscured the lyrics at Tuesday night’s show. But the solos and music was spot on. At one point I felt like Led Zeppelin was blaring through a spacey drum solo.

Heading off to Detroit to continue their loungey Latin rock magic, be sure to catch them before they blow up.  Order or download an album HERE.

Talia Wooldridge is an avid music lover, composer and ethnomusicologist who contributes artist interviews, live concerts, festivals and album reviews for Spill Magazine. She has written extensively on the intersection of music, personal identity and cultural symbolism with an early focus on Latin American Hip Hop and female Cuban rappers. In her spare time, Talia writes, composes music and manages Music Can Heal, a non-profit that brings live, award-winning musicians to inspire healing in hospitals, hospices and communities in need. Her next project is an interactive music-travelogue exploring music cultures and music travel around the globe. Follow her here: www.taliawooldridge.com + www.movetoyourownbeat.com.
RELATED ARTICLES
live reviewthe velvet undergroundtoronto