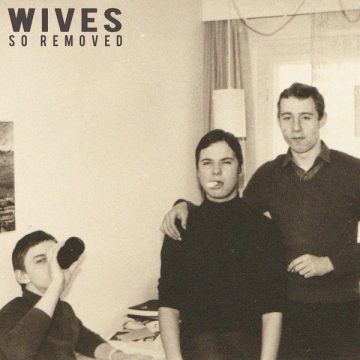 So Removed is the first album for WIVES, the four-piece band based in Queens, New York, and it is an impressive debut. Here, they are trying to be gritty and to evoke the spirit of New York City in the 1980s, both musically and lyrically, and they have done their homework. At times they wear their influences on their sleeves (Lou Reed, Sonic Youth, Iggy Pop), but they make it work. Even the ghost of Jim Carroll makes an appearance here on “Even The Dead” or “Sold Out Seatz”.

The album rocks from the very beginning, and WIVES grab you by the throat and don’t let you go. They demand and get your attention. The album kicks off very strongly with “Waving Past Nirvana”, which I think can be read in two ways. It also serves as a strong indication of what you’re about to hear. To be clear they have a point to make and they use music to make it.

From there, the songs grind out, with tight production, and intense musicianship. Some creative sounds come pouring out of the speakers, especially the closing track, “The Future Is A Drag”, which sounds like a very disturbing 1950’s teen anthem, but it works as a perfect closer. “The future is a drag/We blew it just for kicks”. Quite a bold statement and in many ways a very depressing way to end the album, and in many ways it is the 2010’s “no future”.

This is a great album. However, the one down side of the album is the lack of variety of sound. There are moments where they move a little out of the formula but those moments are few and far between. So Removed would have benefited with some more experimentation with sound. This is a small problem, however, and overall WIVES have delivered a very strong album.

Born and raised in Whitby, Aaron discovered music through his love of The Beatles. This led to a career in radio, writing for various publications, and ultimately a radio show about The Beatles (Beatles Universe), which ran for over four years. When not immersed in music, Aaron enjoys spending time with the loves of his life -- his wife Andrea, and daughters Emily and Linda (all of whom have an intense love of music too).
RELATED ARTICLES
album reviewalbum reviewscity slang records
8.0