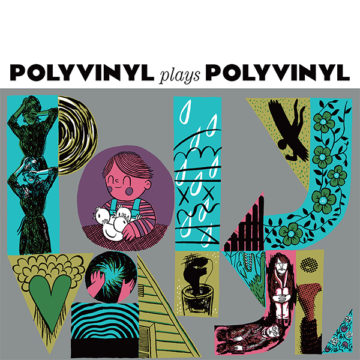 Over the past 20 years, the independent music scene has changed significantly. Bands have come and gone and styles have changed, yet Polyvinyl Records remains true to its DIY aesthetic and dedication to its artists. Polyvinyl was born out of the ’90’s zine era, formed by Matt Lunsford and Darcie Knight as a publication called the Polyvinyl Press. As the publication grew and developed connections to artists and fans it began to sell records at shows before garnering international attention with the 1997 release of Braid’s Frame and Canvas. Polyvinyl now sports a roster of more than 20 bands with more than 200 releases ranging in styles from the twisted Pop of Montreal to the signature Emo stylings of American Football.

Polyvinyl Plays Polyvinyl is a collection of songs by Polyvinyl artists as performed by other members of the Polyvinyl family. Some of these pairings seem to make perfect sense; having Psychic Twin cover STRFKR’s “While I’m Alive” seems logical, especially as the two are currently touring together. Other tracks such as Deerhoof’s cover of Xiu Xiu’s “Hi” in the style of White Reaper exist because “why the hell not?” Many notable artists make appearances from longtime roster members Owen (Mike Kinsella) to up-and-coming artists like Radiation City or Alvvays. Altogether it forms an encompassing selection with some of the independent Pop and Rock’s best artists performing the songs of some truly distinguished musicians. Polyvinyl has never restricted itself to one particular genre and this release serves as perfect proof, as genres and styles are blended and jumped between as you move through tracks.

Released as part of their 20th-anniversary celebration, Polyvinyl Plays Polyvinyl  is joined by  a T-shirt, poster, and skateboard, all of which feature art designed by Jesse LeDoux that incorporates art from Polyvinyl albums. The skateboard was created with the help of Girl and is the first deck to be released by Polyvinyl. Artistically these items capture some of Polyvinyl’s free spirit and show off inspiration from the past 20 years of music.

Polyvinyl Plays Polyvinyl is an essential listen for any independent music aficionados as it brings together artists of the past and future into a collaborative and bizarrely cohesive tribute to Polyvinyl Records. Polyvinyl has been a pillar of the independent community since its inception and hopefully it can continue to provide opportunities to artists and prodigious music to fans.

I am an Edmonton based musicophile and photographer who loves experiencing music whether it's live or on my turntable. I play seven instruments and go to a lot of concerts.
RELATED ARTICLES
album reviewsalohabeach slang
9.0