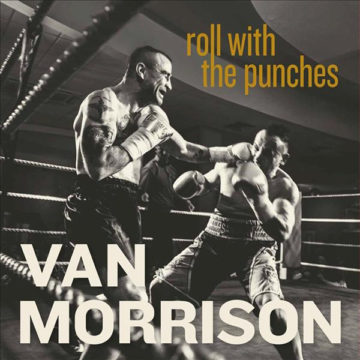 It is hard to believe that Roll With The Punches is Van Morrison’s 37th studio album. The 72 year old singer is one of rock’s most prolific artists in rock today. His last album was 2016’s  Keep Me Singing. This album, as with his last few, finds Van still exploring rocking blues, something he does very very well. Roll With The Punches features mainly covers of classic old blues and rock and roll oldies, but Morrison contributes five new songs to the collection.

It is the new Morrison songs that are the most interesting. Morrison has no problem covering classic material and making it his own, but it is when he is expressing himself through his music that he shines. Listen to “Transformation”, it is Van at his best. Beautiful melody, heartfelt lyrics, reminiscing and religious imagery. It is classic, and had it been released in the mid 1970’s, it would be considered a classic now.

Joining Morrison on Roll With The Punches are Jeff Beck, Georgie Fame (always a pleasure to hear him play), Chris Farlowe and Paul Jones to name just a few. Morrison utilizes his guests and his back-up band well and the music is well played and well produced. Morrison has never sounded better, as his voice just gets better with age.

The problem with this album is it feels like Morrison is just coasting now. If any artist has the right to coast, it would be Morrison. Over the years we have come to expect more from him. His interpretations are fine, but not inspiring. His cover of “Bring It On Home To Me” (the lead off single) is good, but nothing outstanding, nor does it make me forget Cooke’s own version. Jeff Beck adds some a tasteful solo, but the song does not take off the way you expect a Van Morrison song to soar.

Morrison knows his classic music and has selected some brilliant material and clearly understands and loves the blues (the highlight of his covers is the remarkable “Goin’ To Chicago” originally performed by Count Basie (as “Going To Chicago Blues”). Morrison takes on this song, and not only makes it his own but breathes new life into it while maintaining the historical feel of the original (although I think he references B.B. King’s version more than Basie’s).

This is not a bad album, and at moments it is great. Those moments are few and far between. While a ‘coasting’ Van Morrison is still worth listening to, I still long for the energetic Morrison who wants to turn the world on its ear.

Roll With The Punches will please fans but it is not breaking any new ground. Van Morrison still has a great many albums in him, and it is just a matter of time before he gets bored and dazzles the world with the album we all know he can make.

Here's what we think...
Spill Rating
Fan Rating
Rate Here
New Criteria
10
9.2
6.0
Total Spill Rating
9.2
Total Fan Rating
You have rated this
Album Reviews
album reviewsbring it on home to meroll with the punchesuniversal musicvan morrison
album reviews, bring it on home to me, roll with the punches, universal music, van morrison
About the Author
Aaron Badgley

Born and raised in Whitby, Aaron discovered music through his love of The Beatles. This led to a career in radio, writing for various publications, and ultimately a radio show about The Beatles (Beatles Universe), which ran for over four years. When not immersed in music, Aaron enjoys spending time with the loves of his life -- his wife Andrea, and daughters Emily and Linda (all of whom have an intense love of music too).
RELATED ARTICLES
album reviewsbring it on home to meroll with the punches
9.0