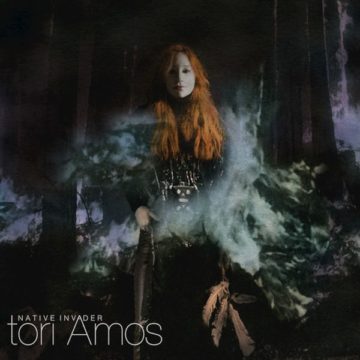 I love Tori Amos and I look forward to each new release. However, her last few releases did not live up to her potential or, in my opinion, her talent. This has changed with her new album.Native Invader.  This is her 15th studio album, and her first since 2014’s Unrepentant Geraldines. In those three years she was busy with tours and a London stage show called The Light Princess (the subsequent soundtrack, The Light Princess (Original Cast Recording) had only a handful of songs from Tori). So it was with great anticipation when I heard news of Native Invader, and very relieved when I heard it.

For this album, Amos returns to what she does best, solid piano based ballads with a few surprises here and there. Amos’s voice has never sounded better and she uses it to great effect on this album. Once again, Amos is working with her husband Mark Hawley, who has worked with Amos since 1996’s Boys For Pele. Hawley engineers the album and provides some programming. To make it a total family affair, Amos’s daughter, Natashya ‘Tash’ Hawley, provides vocals (she has been singing with her mother on the last couple of releases).

Musically and lyrically Amos does not even try to attempt to break new ground, but so what? She does what she does extremely well and she is aware of her audience and her own strengths. But with Native Invader, she does recapture everything that made her brilliant with albums such as Little Earthquakes and From The Choirgirl Hotel. She writes moving melodies and has returned to a more piano based sound. Sure there are other instruments, but it is her and her piano front and centre, as it should be. Listen to “Chocolate Song”, perhaps one of the best songs she has written in years.

In terms of lyrics, the album is based on a theme. Nature and mankind is the main issue but it gets lost in the album. She also intertwines the plight of our First Nations People. Listen to “Broken Arrow”, where Amos sings, “This broken arrow needs heeding…our poisoned rivers feed your greed”. She is not mincing words here and it is this directness that elevates this album over her past few releases.

One issue that someone needs to address with Amos is her album lengths. Just because a CD allows for 80 minutes does not mean one needs to fill it all the time. Amos would benefit from an outsider producer trimming the album. There is also a “Deluxe Edition” which features two additional songs. They neither add or distract from the album, but perhaps some editing and making this two albums should have been a consideration. I must be honest, other than financial there is no reason for a ‘deluxe’ edition to exist with only two additional songs. But that is probably more marketing and the record company than Amos.

Native Invader is one of Tori Amos’s best albums, and certainly her best in a very long time. She has abandoned the frills she was using in the past decade and has returned to form. While it may not attract many new fans, it may have a great many fans of her older material returning for a listen without alienating her established fans.

Born and raised in Whitby, Aaron discovered music through his love of The Beatles. This led to a career in radio, writing for various publications, and ultimately a radio show about The Beatles (Beatles Universe), which ran for over four years. When not immersed in music, Aaron enjoys spending time with the loves of his life -- his wife Andrea, and daughters Emily and Linda (all of whom have an intense love of music too).
RELATED ARTICLES
album reviewscloud ridersdecca
8.0