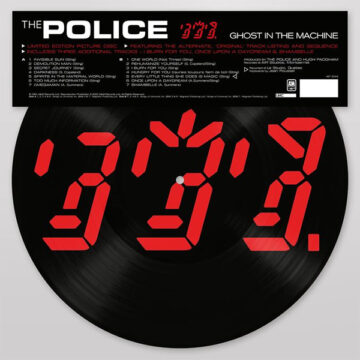 The Police
Ghost In The Machine (Vinyl Reissue)
Universal Music/Polydor

Originally released in 1981, Ghost In The Machine represents The Police in the middle their career. In the late 1970s and early ’80s, a series of successful albums, singles, and sell-out tours saw them at the peak of their powers. Upon its release, Ghost In The Machine debuted at number one in the UK charts, where it stayed for three weeks. It went on to garner three hit singles for the band: “Every Little Thing She Does Is Magic”, “Invisible Sun”, and “Spirits In The Material World”.

In a rather unusual move, Universal Music/Polydor has re-issued this album as a vinyl picture disc, and has re-worked the running order in something they refer to as “the alternate, ‘original’ track-listing and sequencing”. Additionally, three songs have been added to this album: “I Burn For You” (single mix) from the Brimstone and Treacle movie soundtrack album, as well as the previously released “Once Upon A Daydream” and “Shambelle”.

There appears to be no reason given for the re-release of this music. It does not mark an anniversary of the original release, nor does it include extras or special content, which had not been previously released. As it is pretty much simply a re-packaged affair, this appears to be a release for the collector or the die-hard fan. This is a bit disappointing, and The Police probably deserve better.

As a collection, and even with the “alternate” tracklisting, Ghost In The Machine holds up remarkably well. Considering the production, instrumentation, and effects used, there is no mistaking that this is an album born of the early 1980s. Still, it remains timeless. It demonstrates The Police at their polyrhythmic, reggae-inflected, funky, world beat, rocking best. The hit singles remain standouts, and over the years, have become tattooed on our brains. Other songs which bear noting are the ska/dub influenced “One World (Not Three)”, and the driving progressive jazz of “Omega Man”. The sound created by Stewart Copeland, Andy Summers, and Sting was truly something special. The world loved The Police in 1981, and that love has only grown since. It is hoped that the record company can help to share this love, and start to celebrate this music properly.

Musician, writer, and grandad Bryan Williston is a fan of music in all of its forms. He loves to listen to, play, and talk about music, and to share his ideas with others. Despite the failings of humans, he is hopeful about the future, and thinks that Spill Magazine readers are just the best. Bryan lives in Whitby with an assortment of people and dogs.
RELATED ARTICLES
album reviewalbum reviewspolydor
8.0