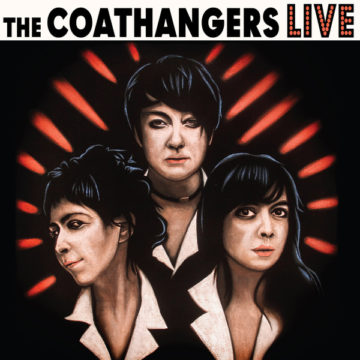 There is a hectic, chaotic energy to live music that studio recordings simply cannot capture, and punk band The Coathangers want to remedy this with their latest album, Live, released June 1 of this year. Live is exactly what it sounds like – a rocking, 2-day live show recorded as an album, a “two-night stand” spanning November 9 and 10 at Alex’s Bar in Long Beach. Advertised as The Coathangers: 2 Nights of Magic and set against a witchy backdrop of tarot card readings, burlesque, palm readers, magicians, and, inexplicably, a giant paper-mache rabbit, The Coathangers were determined to capture the raw magical energy of live performance on tape and hack it down to a frenzied, live album representative of their “entire career in 38 minutes”. The Coathangers is a band whose legacy lies in live performance, and they needed an album that could encapsulate this legacy. “We are intent on capturing a real moment between us and the audience”, the band vowed, and Live insists on recreating the magic, connection, and wildness of live music.

The all-female punk band has been churning out music for thirteen years – hard to believe they haven’t been around longer, given the raw old-school punk tunes on Live, spinning already gritty music into blistering chaos. The single “Gettin’ Mad and Pumping Iron” from the 2009 album Scramble, boasts heavy guitars overlaying a jaunty bass riff, screeching, frenzied vocals ripping through the instrumentation. The live version is somehow even more electric and manic than the original, with crashing music that weaves a sonic cage around the scraping, spitting lyrics. “Captain’s Dead” off the 2017 EP Parasite features a fast-paced guitar and frenetic drums, followed by a sweeping, melodic chorus. The band’s self-titled album’s jiving “Tonya Harding” makes you want to dance with its classic punk riffs set against whining, yipping vocals that become wilder as the tempo rises. Vocals are ripe with raspy feminine energy and weave over top of one another, crocheting a bopping pattern of rock ‘n’ roll that lacks the modern sound of the cleaner, staccato original recording. Fan favourite “Adderall” is slower and more lyrical, mixing distorted punk-rock choruses with melodious verses and eccentric pockets of paw-muted guitar and static.

Live loses none of the original recordings’ instrumentation or vocal effects; instead, The Coathangers’ songs are infused with the euphoric sonic chaos lent by the adrenaline and sheer joy of live performance.

Isabel is an English major at the University of Toronto, and spends most of her time reading books, listening to punk rock music, and writing for anyone and everyone willing to read it. Raised in Toronto, her somewhat eclectic music taste has been shaped by a healthy mixture of mosh pits and Mirvish musicals. She thinks live music is the highest form of entertainment.
RELATED ARTICLES
album reviewalbum reviewssuicide squeeze
9.0