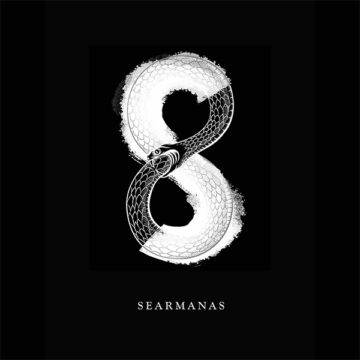 Searmanas is a word that is derived from Gaelic, and it means ceremony or ceremonial. It is the perfect name for this artist. The debut album, Searmanas, has a feeling of official ceremony, an album that is marking the beginning, or possibly the end, of something. They are based in Brooklyn, New York, and in actuality consists of Niabi Aquena. The album was preceded by a couple of the singles “Undo” and “Sea”, but they do not do the album justice. They are very indicative of the record but I am not so sure those or any songs can exist on their own, without the context of the whole album.

The album is difficult to place in a genre. Searmanas drifts between styles , and she deserves a great deal of credit for producing a strong debut album, full of layered and moving sounds. She is not afraid to move around the various styles while still utilizing the tools and instruments with which she is most familiar.

It is an electronica album but that sells the album short. The real star of the Searmanas is Aquena’s voice. Her strong vocal performance, that is the highlight. Throughout the album she uses her voice to express herself and the very personal nature of the album.

Searmanas is a very emotional record, and most of the emotion comes through the mix, the vocals and music, rather than lyrics. She actually has the ability to use synthesizers and computers in the same manner as someone such as Ryuichi Sakamoto or Underworld. However, she does use words in the same manner she plays. For example, listen to the first single, “Undo”.

It reads as poetry and set against the music it is sheer beauty.

Searmanas is an excellent debut album. She is finding her voice and determining her own style. It is multi layered and well worth the time to listen to it as an album.

Born and raised in Whitby, Aaron discovered music through his love of The Beatles. This led to a career in radio, writing for various publications, and ultimately a radio show about The Beatles (Beatles Universe), which ran for over four years. When not immersed in music, Aaron enjoys spending time with the loves of his life -- his wife Andrea, and daughters Emily and Linda (all of whom have an intense love of music too).
RELATED ARTICLES
album reviewalbum reviewscleopatra records
10