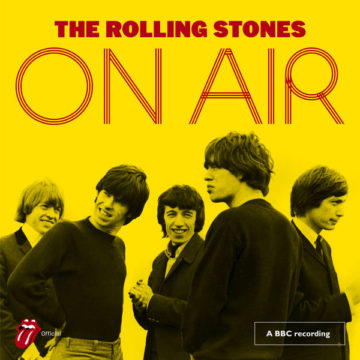 The Rolling Stones
On Air
Polydor

Few artists have had such a profound and rich impact on pop culture, the music industry, and the world as The Rolling Stones. Even as the band enters into the latter half of its fifty years together, they stand as titans of rock. Having just wrapped up their No Filter European tour, and hot off the release of last year’s critically acclaimed studio record, Blue & Lonesome, The Rolling Stones have turned their attention to their vault, a treasure trove of unreleased material that consists of what I hope to be demos, unreleased songs, alternative mixes, and over fifty years of live performances. On Air is a collection of such live recordings ranging from 1963 to 1965 that aired on the BBC, shinning a light on the formative years of the band. This two year period catches the band in the middle of their steady rise to fame, having only formed in 1962 and being signed to Decca Records in 1964.

While Jagger and Richards are a song writing duo, deservingly revered in the same light as McCartney and Lennon, what those who are not familiar with the origins of The Stones often do not realise is that they started off almost exclusively performing blues covers from Chicago and the Mississippi Delta. For this reason, much of On Air is comprised of such covers, including hits from the recently late Chuck Berry — “Roll Over Beethoven”, Bo Diddley — “Mona”, and Willie Dixon — “I Just Want To Make Love To You”. Over the course of the deluxe edition’s 32 songs (the standard edition comes with 18) The Stones cover a number of classic blues, along with some lesser known treasures, which further point to the band’s unmatched deep-rooted appreciation and familiarity for the blues.

From stirring ballads like “You Better Move On” and “Confessin’ The Blues”, to upbeat swinging tracks like “Around and Around” and “Route 66”, The Rolling Stones, despite being in London, capture a spirit of the blues which feels authentic to the one that perpetuated America in the decades before them. There is a sense of grit, conviction, and soul in On Air; it is exactly this that made The Stones such a sensational band in the first place. Of their originals — “(I Can’t Get No) Satisfaction” stands out as much for Richards’ fuzzy guitar and signature riff as it does for being the biggest hit on the album. The performance of “(I Can’t Get No) Satisfaction” feels explosive, and features what sounds to be an incredibly tight band allowing for Jagger to soar with a raspy and powerful voice. Other originals include early works such as “The Last Time” and “The Spider And The Fly”, both of which are performed superbly.

Just as Blue & Lonesome demonstrated, On Air reminds their core audience that while The Rolling Stones are rock and roll pioneers, they are also one of the best blues bands to emerge in the 1960’s. Their early performances, as captured in this incredible collection, shine a light on why their rise to fame, and global success was sudden and managed to match — and in some cases, surpass — that of The Beatles. On Air is a thrilling look at the origins of one of the world’s biggest and longest running bands, making it an absolute must have for fans of collectors, and fans of all generations.

A passion for music has always been a part of Gerrod’s life. As a young boy, he was raised on a steady diet of the music from The Chili Peppers, Aerosmith, The Stones, Prince, and others from his mum. Raised in the GTA, Gerrod continued to foster his love for music by attending a wide range of concerts and learning the drums. His unapologetic passion for music has no bounds and has spread to a wide variety of styles, whether it be the 90’s rock that sound tracked his teenage years, the jazz he studied in university, or his newfound love for hip-hop. He recently received his bachelors in music and education from York University and is passionate about writing and reviewing good (and less than good) music. Gerrod is also the drummer and songwriter for a Toronto based rock & roll band, One In The Chamber.
RELATED ARTICLES
album reviews
7.0