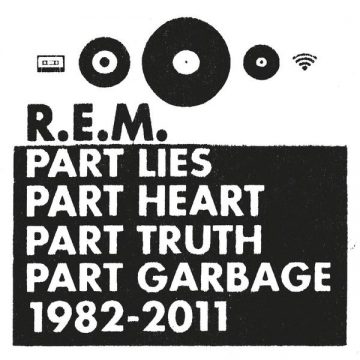 Let’s all take a moment to look back at the ‘90s. Twenty years, has it been that long? It may be about time to start reading the waves cast by that decade. One such ripple was born in the early ‘80s, swelling to enormous proportions in the ‘90s, and now finally breaks upon the rocks, as all good bands must. I refer, of course, to REM. Let’s not forget their 1994 breakthrough, Automatic for the People, which almost beat Nirvana’s Nevermind as the year’s highest grossing record. Looking back from a 2011-perspective, where Grunge is all but buried and Indie is breathing but bedridden with a bad case of stagnation (perhaps beginning to eat itself alive?), maybe in the face of time Automatic for the People turned out to be more influential than Nevermind. Too bold? After all, Kurt Cobain is dead and one of THOSE legends now…
But hey, if Peter Buck (guitarist) is good enough for Colin Meloy (Decemberists), and frontman Michael Stype is good enough for Patti Smith, then god-damn-it they’re good enough for me!

So now comes the retrospective. The greatest hits compilation arrives just in time for Christmas (coincidence? Hardly, and I’m sure box sets will follow). But for now it’s the greatest hits for all the folks who found it superfluous or inconvenient to buy the records before, though they’ll insist they’re “really quite the REM fan” as they shell out 25-odd bucks for a bunch of songs they’ve heard already.
But they’ll be mistaken! Although I’d still suggest just going out and buying an original LP (cheaper and better), the retrospective, entitled Part Lies, Part Heart, Part Truth, Part Garbage 1982-2011, borders on comprehensive. While it’s got all the hit tracks (“Man on the Moon,” “The One I love,” “Everybody Hurts,” etc), it’s also got some of the lesser known successes like “Finest Work Song” and some great tunes from their Alt/Garage days like “Gardening at Night.” This is not REM’s first compilation. It is however the first one to feature tracks from their early cult following days under IRS Records.

Ultimately this release faces the provisos of any greatest hits record: If you like REM, you’ll like this record (it goes further than most compilation efforts, certainly further than their previous one) and if you REALLY like REM, then you don’t need this record. Your money’s better spent on the LPs you don’t have yet. And if you don’t like REM, well… what’s wrong with you? Too hip for REM?? You’re ridiculous. Get outta here!