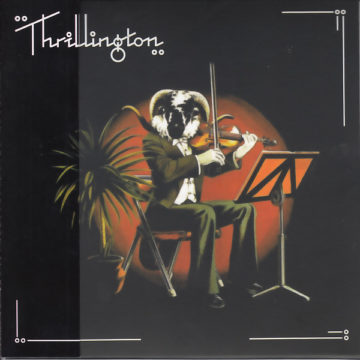 An odd album by Paul McCartney and an even odder choice for rerelease. Over the past few years, Paul McCartney has been rereleasing his catalogue. Usually this takes the form of a box set or expanded edition. Today he is rereleasing four albums on black and coloured vinyl, as well as CD. He has rereleased an album that has been out of print for a very long time. The underappreciated masterpiece that is Thrillington. Everything about this album is brilliant, including the back story.

McCartney has gone under several pseudonyms in his career. Bernard Webb, The Country Hams, Suzy and The Red Stripes, Twin Freaks, The Fireman and Percy Thrillington. McCartney has assumed these characters and names for many reasons. It is still not clear as to the origin of the name Thrillington.

While Paul and Linda McCartney were recording the Ram album, McCartney thought it would be a good idea to record and release an instrumental version of the album for airplay on ‘Easy Listening’ stations. In the 1960s through to the mid 1980s, several orchestras existed in order to record instrumental, orchestral versions of pop songs for play on such stations. Not just for The Beatles, but most pop hits. The Hollyridge Strings, Percy Faith, even Jackie Gleason Orchestra. McCartney thought he might be able to get a jump on such records.

Working with music arranger Richard Anthony Hewson (Supertramp, Fleetwood Mac, Mary Hopkin), the two set out to record an easy listening version of Ram. It kind of grew from that and became slightly more avant garde and creative. Use of sound effects and orchestras tuning up added to the overall texture of the album.

Thrillington was recorded, mixed and  completed in 1971, but for several reasons, it was shelved. In 1978 McCartney decided to release the album under the name of Percy ‘Thrills’ Thrillington, an alleged London socialite and music arranger. The advertising in the U.K. was nothing short of brilliant with personal ads being placed throughout local papers in England. Some were very funny and were intended to stir interest, along with the advertising campaign, “But darling, doesn’t everyone know Percy Thrillington?”.  McCartney even went so far as to create a biography and hire an actor for photos.

Thrillington was released, along with a single, and both did extremely poorly in terms of sales. The album was not even reviewed in the press. The only mention of the album at the time was a brief note in Rolling Stone Magazine’s  “Random Notes”, and that was to refer to the mystery of the album. Thrillington became somewhat of a collector’s item, even though fans were not quite sure if McCartney was involved or not. In fact, he did not come clean about it until 1989. In 1995 McCartney finally rereleased the album as a CD, and it was included in the box set reissue of Ram in 2012. But this is the first vinyl pressing of the album since 1977.

The album itself is outstanding. Very creative and odd instrumental versions of the classic Ram album. It is captivating and not what one would expect. It is quite experimental and enjoyable. It has also gotten better with age.

This is not an album one would expect from Paul McCartney, but then again he has demonstrated time and again that one should never expect anything from him. Thrillington is an album that was out of date the minute it hit the record stands. Not because it was old fashioned but because he was years ahead of his time. Years later, one would see symphonic album interpretations of pop albums, McCartney was simply ahead of his time.

Born and raised in Whitby, Aaron discovered music through his love of The Beatles. This led to a career in radio, writing for various publications, and ultimately a radio show about The Beatles (Beatles Universe), which ran for over four years. When not immersed in music, Aaron enjoys spending time with the loves of his life -- his wife Andrea, and daughters Emily and Linda (all of whom have an intense love of music too).
RELATED ARTICLES
album reviewspaul mccartney
10