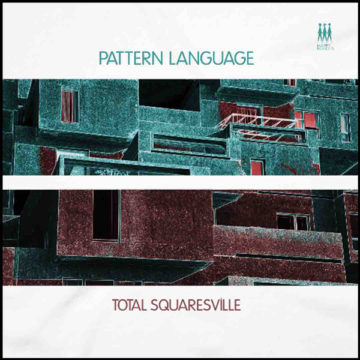 What would be motorik in terms of music? I guess something to get you motorin’ down the Autobahn, or the open highway, if you are from Colorado like Chris Frain, aka Pattern Language. Or you can just simply go back to all the musical references Frain uses on his debut mini-LP, Total Squaresville – Kraftwerk (check), Neu! (double check), LA Dusseldorf (check), Harmonia (another double check), or some of the more modern versions, like Stereolab. Frain has all of those covered, along with all those that followed in between, like Thomas Dolby or any from the ’80s English synth school, but is it any good and listenable?

Well, it is quite listenable, and it starts off quite promising with the opener “By The Time We Get There”, a tune that if you don’t know or don’t remember what an essential Motors track (or should I say trak) should sound like – equal parts of Kraftwerk and Neu!, just a bit toned down Harmonia style. “Deeply Recessed Windows” with its slowed down tempo veers off further into Harmonia territory, but no Michael Rother guitar stylings though. So far, so good. “The Castellers” stays more or less in the same castle, and if you are really driving, will not be any kind of distraction. When “Squaresville” and “A Pattern Language”,  the album title and band name permutation titled songs come along, you start thinking, a nice little idea, but I’m afraid that is the best you get from these two. Still, the album started out strong and finishes strong with “Le Choc Des Étoiles”, maybe the use of the French language was inspirational, but along with the opener, it is the strongest thing here. Just like good bookends.

Is Total Squaresville greater than the sum of its parts? Not really. You can definitely find yourself in Squaresville on this album, but it definitely is not a total one. Maybe it is just a bit too gooey in the middle. Cutting Train some slack, it is a first solo effort and there are definitely signs he can do better. Let’s hope so.

Formerly a lot of things, including a journalist and a translator, currently a freelance writer living in The Netherlands.
RELATED ARTICLES
album reviewspattern languagetotal squaresville
10