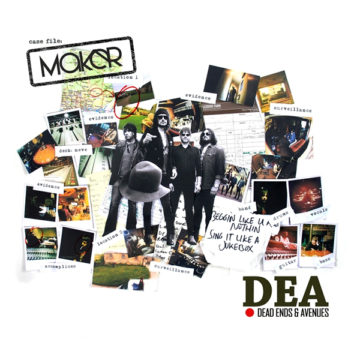 Maker is a four piece band based in Kent, England. Alessandro Marinelli (vocals), Andrew Donaldson (guitar), his brother Gavin Donaldson (drums), and John Astin (bass) make up the band, and collectively this band has just produced one of the best debut albums in a very long time.

Maker has played it very smart — they issued two EPs prior to this album (Move Your Feet and Girl Quit Your Crying, both released in 2017). Both of these EPs were a taste of what was to come from this very talented band. DEA – Dead Ends And Arrivals — is a stunning album, that would not be out of place in 1966. However, it is also not out of place in 2018. If anything, these guys are carving their own distinct genre.

From the opening track, “Soul”, the listener knows what is in store. This is soul driven, rhythm and blues rock and roll. Yes, all three rolled up into one band. And they take each genre and roll them into an awesome, powerful sound. Lead vocalist Marinelli has a set of strong pipes that drives the band into high gear. He is feeling every word he sings.

The playing is tight — short, electric bursts that come through loud and clear from the speakers.

Some of the songs have appeared on their previous EPs, but they fit onto this album just fine. Think of the old days when singles were issued prior to the album, this is what Maker is doing. Fans may want to take note that there are songs on the EPs not featured on the album.

What makes this album work so well is, although Maker is a rocking outfit, there are a variety of sounds and music throughout. It is not just one sound repeated. Maker takes the listener for a ride throughout  DEA – Dead Ends And Arrivals into a world of rocking/soulful music and great stories. The album comes to a beautiful close with the wonderful ballad version of the opening track, with the wonderful title “(Little Bit of) Soul”.  It makes for great bookends.

This is the album we have been waiting for, and they deliver. It is a brilliant collection. They have, however, set the bar very high with this and it will be interesting to see how Maker surpasses  DEA – Dead Ends And Arrivals in the future. In the meantime, dig this and pray for a North American tour.

Born and raised in Whitby, Aaron discovered music through his love of The Beatles. This led to a career in radio, writing for various publications, and ultimately a radio show about The Beatles (Beatles Universe), which ran for over four years. When not immersed in music, Aaron enjoys spending time with the loves of his life -- his wife Andrea, and daughters Emily and Linda (all of whom have an intense love of music too).
RELATED ARTICLES
album reviewskidda recordsmaker
10