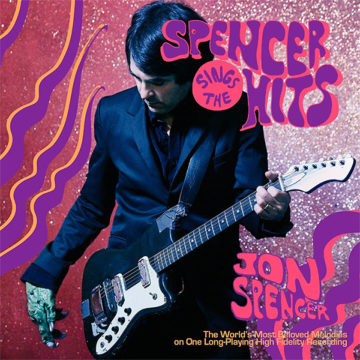 Jon Spencer
Spencer Sings The Hits
In The Red Records

Jon Spencer has always been known for his bombastic and some would say arrogant style. Confidence and swagger can be misunderstood as arrogance so take that with a grain of salt. That being said, his first solo venture, Spencer Sings the Hits, is no exception. We have a crossover between his old bands Pussy Galore and The Jon Spencer Blues Explosion (JSBX) that I’m sure we’ve all been waiting for. His slick, funk tune-smithing is mingled with his James Brown-ish delivery backed by a metallic percussive crunch.

Album opener “Do the Trash Can” is a one-two punch of Spencer’s groove and thickly distorted guitar. “Fake” is very reminiscent of Right Now!-era Pussy Galore with the clanging percussion however the funk of JSBX is unmistakable. “Beetle Boots” has to become a single being the catchiest in the bunch by far. In “Wilderness” he gets the band chanting to “Set the wayback machine for never”. They better not listen because this slab of pseudo-retro wouldn’t be possible without it. 12 songs in a little over 33 minutes seems like a short ride in that machine but Spencer proves he is back in form and more of a badass than ever. Let him sing you the hits.

Michael Mitchell's love of music started at an early age and slowly became an addiction that courses through his veins to this very day. It is guaranteed that if you are in his proximity, he will try to get you to travel to the nearest record store and make you buy beyond your means. His wife and two children acknowledge his problem and continue to encourage him into rehab. He currently writes for Torched, Stereo Embers, God is in the TV, ReGen and Spill magazines.
RELATED ARTICLES
album reviewalbum reviewsdo the trash can
7.0