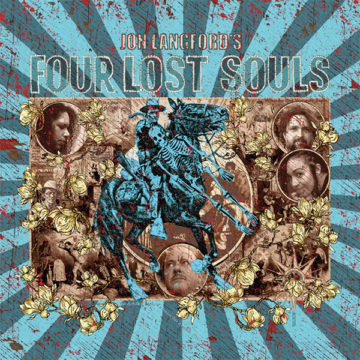 I wanted to love this album. Jon Langford is a genius. This album was written and recorded in America during the Trump election — literally during and after the election. I thought this should be brilliant. Sadly, Four Lost Souls is not the album that I was expecting. Not that it is bad, it just is not the usual Langford quality.

The band formed in 2015, consisting of Jon Langford (The Mekons), John Szymanski, Bethany Thomas, who collaborates with Szymanski, and Tawney Newsome, who has worked with Lanford in the past. Guests on the album include Tomi Lunsford, Nashville royalty who has recorded with Porter Wagoner and Delbert McClinton to name just two, and Will McFarlane who works with Bonnie Raitt. Top it off with the legendary producer Norbert Putnam, who was Elvis’s bass player for years, and producer of Michael Nesmith and The Flying Burrito Brothers, and this album should be an instant classic.

The problem with the album is the material. It was recorded over four days and in some ways the record sounds like it. The songs have potential but do not seem to go anywhere. Langford knows how to write, but on this album the songs just don’t sound finished.

The playing is great with fantastic twangy guitars and the band is tight, but again the songs just kind of begin and end with no real flare or emotion. There are duets and fun things strewn about, but it just does not add up to a great album.

Langford is a talented writer and can turn a phrase with the best of them. Listen to the lead-off single “Fish Out Of Water”, which is a highlight of the album. Great socio-political lyrics, but these highlights are not often and when his writing peaks, as in this song, it emphasizes how great the whole album could have been.

However, fans of Langford will enjoy Four Lost Souls. It has its moments, but at times it felt like Four Lost Souls was custom made for NPR instead of the alt-folk or rockabilly fans.

Born and raised in Whitby, Aaron discovered music through his love of The Beatles. This led to a career in radio, writing for various publications, and ultimately a radio show about The Beatles (Beatles Universe), which ran for over four years. When not immersed in music, Aaron enjoys spending time with the loves of his life -- his wife Andrea, and daughters Emily and Linda (all of whom have an intense love of music too).
RELATED ARTICLES
album reviewsfish out of waterjon langford
8.0