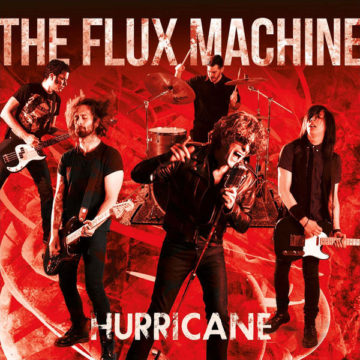 How do you mix a good cocktail that will pump you up, get you moving, jump around so that at one point you can simply drop? Usually, it means that you need at least two strong drinks, maybe even three, something to give you spice, like vermouth and something else to sweeten the punch, like a fruit juice of some sort.

There’s no difference if you want to make such a musical mix – one or two strong rocking influences, maybe three, something to spice it up a bit and something a bit melodic like some vocal harmonies or a good melody to sweeten the punch.

On the evidence of their debut album Hurricane, New York City’s The Flux Machine have come up with exactly that kind of a musical mix. And like the renowned Manhattan among cocktail drinks, these guys pack a might punch with all the necessary spice-ups and sweeteners.

The Flux Machine wouldn’t be from New York City if with their sound they didn’t lean towards some of the raunchier NYC bands. In their case, it is a double dose of Ramones and a single dose of Blue Oyster Cult, for starters.

Then, it wouldn’t be a good, strong cocktail if it didn’t have an overseas spicing agent, and what better could you add then good, old Rolling Stones. They can even double as ice cubes!

So, what about the sweetener? Well, here The Flux Machine lead man Louis Accorsi and his guys went for the melodic stuff that still had some punch in itself too – Cheap Trick and The Foo Fighters, or both, take your pick.

In theory, making such a combination can sound fine, but when you try to shake such a musical mixer in the studio it can turn into a big, messy puddle. Usually, the success or a flop in these cases depends on two things – lousy songs that turn out to be simple copy/paste concoctions or lousy production that doesn’t give you that desired punch that such high energy musical idea usually has on the stage.

No worries in both of these respects as far as The Flux Machine’s Hurricane is concerned. This band is crafty enough to make their musical inspirations shine without sounding either trite or copyist. Also, the production does let the high energy come through in full, and the band do sound like a hurricane that will carry your living room up in the sky.

So, if you are seeking some music to think about, mellow down or something truly experimental, you might as well look somewhere else. But if you are in need of a pick me upper musical cocktail that will make you jump around and/or dance, you can certainly do much worse than The Flux Machine and their musical Hurricane.

Formerly a lot of things, including a journalist and a translator, currently a freelance writer living in The Netherlands.
RELATED ARTICLES
album reviewshurricanethe flux machine
7.0