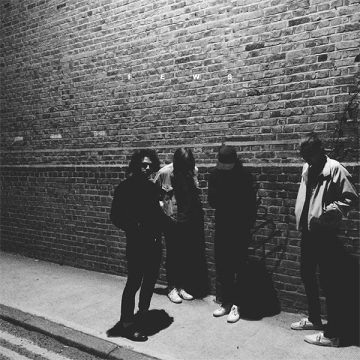 With its debut album Means, Alt-Rock band FEWS bares its teeth with 10 tracks inspired by various genres of music but huddled beneath the safety of Indie Rock. It’s no surprise that the band has a unique feel to it. Its members are not only American, but also British and Swedish – three parts of the world with arguably three different scenes of music, despite trending towards a similar sound recently. On Means, this Western-Scandinavian blend holds proud, occasionally adding psychedelic elements to what would otherwise be mundane stuff easily conjured up by Muse or bands with a similar M.O. While at times they feel easily comparable to their inspirations, this infusion of geographic influence helps to create a signature for the band.

Amongst the 10 tracks, occasional signs of Punk Rock and even Post-Rock can be detected. The most varied-sounding is “100 Goosebumps,” which sounds like it’s the kind of thing DJs will remix at Swedish dance parties. The melody is especially key for making it stand out, in that accent-tinged intonation of “I got! Goosebumps!” Whether or not this is appealing is difficult to determine, as the band’s goal is unclear with these off-the-radar attempts. Debuts tend to go like this – a conglomeration of years of experimenting thrown into one piece. Somehow the band manages to make these songs, recorded at different times in their conception, flow though. Truly, their greatest act is forged when the electrics are on high and they are busting out Vampire Weekend like melodies over dark yet summery tones. “If Things Go on Like This” achieves this, but sometimes sounds a little too punk. It’s tracks like “The Zoo,” “The Queen,” and “Zlatan” that perfectly execute what will likely become this band’s identifying sound.

FEWS’ sound contemplates a balancing act of reverb vocals with echoed bass. For the most part, the wobbles are kept to a minimum. Despite the ambitious strides, the debut Alt-Rockers show a handle rarely known to entry-level artists. The album’s fluidity is a procession of wavy guitar hooks that drown into each other between tracks, acting as causeways in the evolutionary 10-track piece. There are occasional speed bumps along the way, but any band willing to try various things on the road to discovery deserves to be commended. It will be interesting to see what FEWS will produce next.

Robert Defina is an avid critic both on paper and in person. He spends more time writing album reviews than he does worrying about his future. He hopes that this sort of procrastination never grows old.
RELATED ARTICLES
album reviewsfewspias
8.0