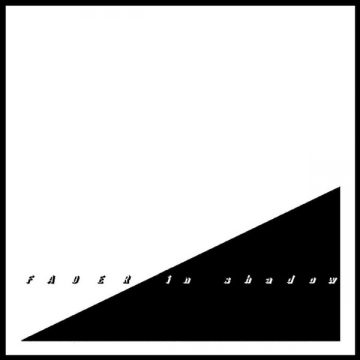 In Shadow is Fader’s second album and they just keep getting better.  Although their debut was more than impressive, with In Shadow they knock it out of the park. From beginning to end this is more than an album, it is an entire universe created by two extremely talented artists, Neil Arthur of Blancmange and Near Future, and Benge of John Foxx and The Maths, Wrangler, and Creep Show.

From the beginning track, “Always Suited Blue,” with its cryptic lyrics and minimalistic electronic music, you instantly know that you are not in for a comfortable, easy listening ride. “Every living thing that has ever been recycled in you, in me,” repeats Arthur into an almost fever pitch with the pounding electronic music. More like uneasy listening.

Elsewhere the music becomes somber, with Arthur again utilizing lyrical repetition to get his point across. “What Did It Say,” a song that on the surface might not be disturbing, creates an uneasy feeling, leaving the listener with the notion that things are just not okay In Shadow. Benge uses electronic instrumentation perfectly. Although analog synthesizers are utilized, it is not a throwback to the 1980s,nor does he try to be ultra-current. Rather, he uses the instruments effectively, creating mood and some beautiful melodies.

Arthur’s voice is extremely expressive, at times downright angry, and sometimes sinister. Occasionally, as in the last track “Reporting,” the listener is forced to strain to hear him.Again, here is a song that on the surface should bring resolution to the album, yet when Arthur gently sings the line“Heading home now,” one gets the sense that it is not going to be a pleasant homecoming.

In Shadows is art. This is an album that does not work as background music. It demands, albeit quietly,your attention, and it deserves it. The lyrics, the production, the composition, the sequencing of songs, and the artwork all come together to form a near-perfect album. What is even more remarkable is that both Arthur and Benge have other projects on the go constantly, yet nothing suffers for their work ethic.