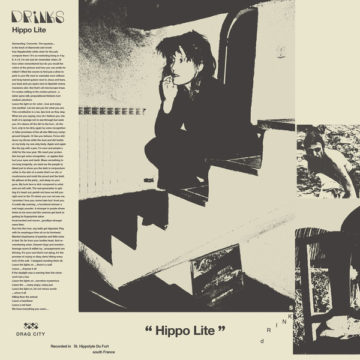 Hippo Lite is one of the most unique albums released this year. Simply put, it is brilliant. Drinks is made up of Cate Le Bon and Tim Presley (White Fence) and Hippo Lite is their second album as Drinks.

It is impossible to categorize this music. Imagine Zappa, Beefheart, and Syd Barrett recording in the 1980s and you come close. But that is underselling this work of art. Presley and Le Bon work off each other and create something that is original.

There is humour, and there is unease throughout Hippo Lite. The album kicks off with the folky and retro sounding “Blue From The Dark”. Instruments are added and  layered until almost a minute into the song, when the vocals start. The song would not be out of place in a good David Lynch film. This is followed by a 51 second instrumental, which is later reprised in much longer form. That gives you some indication of the unusual format of the record.

The twists and turns this album takes can become almost overwhelming. Picture being on a roller coaster in the dark, and you get the gist. But there is a pay off. When it is finished, the first instinct is to start it again. Although scary at times, one quickly realizes that this is no ordinary album. It is art.

Avant garde is a term thrown around far too much, but in many regards Drinks qualifies. Using various techniques, Le Bon and Presley are not afraid to experiment and go into those dark corners, but they do it with a musical sensibility. At times, the music is downright pleasant, but dark clouds are lurking somewhere. Listen to the sounds added to the songs “When I Was Young” and “In The Night Kitchen”. They enhance the song in that it creates a sonic picture. This is not as easy as it would sound. The mix, volume and presence of sounds is perfect.

This is not an album for everyone. It is not intended to be for everyone’s taste. However, give it a chance and it may win you over. It is not album that can be ignored. Once the album is on, Hippo Lite demands the attention of the listener. It is not background music, or filler, it is intended to be taken as literature or fine art. And yes, it is that good.

One final note, it features one of the best album art images released in a long while. Without giving much away, the cover art says a great deal of what the listener is about to hear. Hippo Lite is a near perfect album.

Born and raised in Whitby, Aaron discovered music through his love of The Beatles. This led to a career in radio, writing for various publications, and ultimately a radio show about The Beatles (Beatles Universe), which ran for over four years. When not immersed in music, Aaron enjoys spending time with the loves of his life -- his wife Andrea, and daughters Emily and Linda (all of whom have an intense love of music too).
RELATED ARTICLES
album reviewscate le bon
10