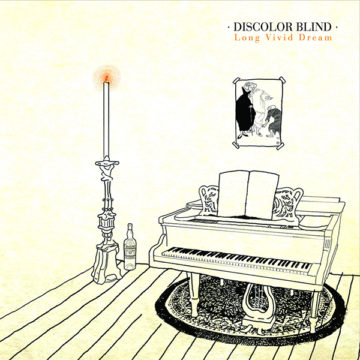 Discolor Blind is a duo out of Montreal, and Long Vivid Dream is their debut EP. Ashkan Malayeri is the core of the band, producing, writing and performing most of the music. He was born in Tehran but settled in Montreal, where he met Alexis Nadeau (a Montrealer) who provides the dreamy vocals for his soundscapes.

What makes this EP interesting is the variety of influences heard throughout the five tracks. At times one can hear old jazz, to lounge music, to almost goth like music. Throughout, it is well thought out music that is both melodic and intriguing. One just never knows where Malayeri is going next with the music.

On this EP Malayeri contributes bass, guitar, drums, synthesizer and programming. He is joined by Jeff Bass on “What Pain Brings”, who plays drums, rhodes and analog synth. These instruments help flush out the song and give it that much needed warmth that would not exist were it not for Bass’s playing. Bass is perhaps best known for his work with Eminem. Kelly Craig’s trumpet also adds to the overall texture of the song. With a lengthy music introduction, one would be forgiven for thinking it was another instrumental on the EP, but then Nadeau comes in with her stirring vocals, owing a little to Kate Bush and Yoko Ono. It makes for fascinating listening and is one of the highlights of the EP.

The one problem with the EP is that it does seem directionless at times and kind of meanders without much apparent thought as to a structure for the EP. It plays like a series of individual singles as opposed to a coherent, flowing, consistent EP.  However, this seems to be the way of the music world these days, and fewer and fewer newer artists seem to be concerned about sequencing their songs in a specific track order for release.

However, all the music is played beautifully, and the use of real instruments (trumpet, cello and live drums) adds to the sound and fills it out. The songs do play well and Long Vivid Dream has great deal of good things going for it. Some fine guitar work, atmospheric production and some very strong vocal performances.

Long Vivid Dream is a very strong start and it will be interesting to see what the band can deliver in the future.

Born and raised in Whitby, Aaron discovered music through his love of The Beatles. This led to a career in radio, writing for various publications, and ultimately a radio show about The Beatles (Beatles Universe), which ran for over four years. When not immersed in music, Aaron enjoys spending time with the loves of his life -- his wife Andrea, and daughters Emily and Linda (all of whom have an intense love of music too).
RELATED ARTICLES
album reviewsdiscolor blindlong vivid dream
7.0