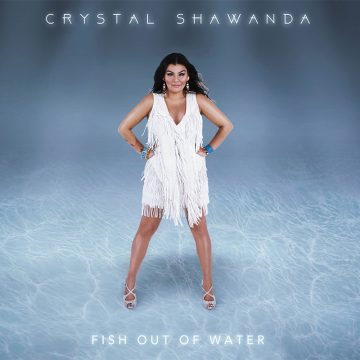 Crystal Shawanda considered herself a Country-music outsider based on her eclectic sound and style, which fuses Blues with traditional Country sensibilities. In her latest album, Fish Out of Water, the Juno Award-winner applies these anxieties to her advantage, expressing her personal preoccupations with powerful vocals.

Opener “Fish Out of Water” starts the record off with an anthem of self actualization. The title track sets the tone for the album, presenting an awareness that what differentiates us makes us stronger. In Crystal’s case, this mindfulness resonates with her Rootsy, Bluesy pull, which stands out against some of the less rough-and-tumble sounds coming out of Nashville. The track also speaks to her aboriginal background, which has informed and enriched her talents as a singer/songwriter.

“Laid Back,” stands out among the tracks. The song draws on the predictable elements of a Country-music love song while exceeding the comfortable familiarity, infusing the work with the soulful originality of her voice.

Crystal’s talent lies in her ability to utilize these popular mediums, while simultaneously carving out her own place within the genre. The album fits the title and reflects the virtues of a non-conforming performer who is unapologetic in her approach, her range and talents as a vocalist, and distinctive sound.

Elizabeth is a Toronto via Caledon writer whose rural upbringing left a lasting love of anything with a banjo and an upright bass. She scours Toronto venues for both the musical talent and the beers on tap.
RELATED ARTICLES
album reviewsfish out of water
8.0