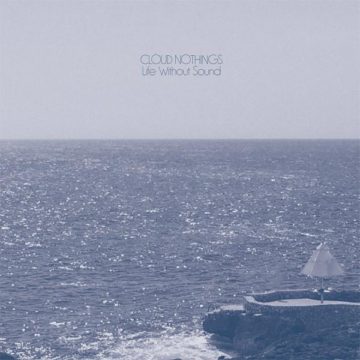 While attending high school in Cleveland, Cloud Nothing’s 25 year-old frontman, Dylan Baldi, would spend hours driving around the suburbs listening to music. If it sounded okay to him in that context, then it passed the test. He used the same method in judging the band’s new album Life Without Sound, and concluded that of the band’s four albums to date, “this one felt the best”.

Baldi and his bandmates (drummer Jayson Gerycz and bassist TJ Duke) fleshed out the songs on Life Without Sound for a year before heading to Sonic Ranch in El Paso, Texas to hook up with producer/engineer/mixer John Goodmanson (Death Cab For Cutie).

This is what I’d call high-energy-melodic-alternative-rock. Key tracks include the first single “Modern Act” with Baldi’s aerodynamic guitar work, as well as “Up To The Surface”, and the punkish “Darkened Rings” which playfully captures the best of the punk era.

Baldi concludes his overview of the album by saying, “This record is like my version of new age music. It’s supposed to be inspiring.” Mission accomplished.

Cloud Nothings celebrates the release with a performance at Lee’s Palace in Toronto on January 27th, on the album’s North American release date.

Gerry Young is President of Current Records and Management, and author of the 2011 biography Pop Goes The Weasel: Rock And Roll Off The Record, available at Indigo/Chapters, Barnes & Noble, and Amazon.com. He has recorded and managed Juno Award winning bands Martha And The Muffins and The Parachute Club among others.
RELATED ARTICLES
album reviewscarpark recordscloud nothings
9.0