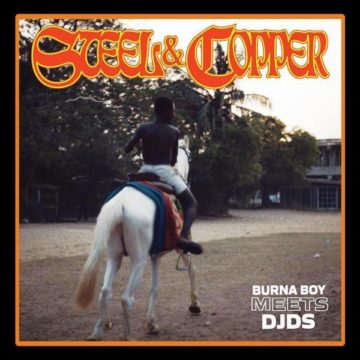 Nigerian rapper Burna Boy has teamed up with DJDS to surprise us with a four-track EP titled Steel & Copper. The Atlantic Records signed rapper previously gave us Outside, released early 2018.

Most popularly, we heard him briefly on Drake’s More life in uncredited features, while on the other hand, DJDS released an album last year featuring Vic Mensa, Charlie Wilson, Khalid, and many more.

The collaboration gave us a unique and deep feel to the original Burna Boy sound, starting the EP with “34”. The song title is  is a reference to the NBA player, Giannis Antetokounmpo who sports the number on his Milwaukee Bucks jersey. “34” has a rhythmic constant sound to it, he raps about growing up with his family alongside drug dealing references. Followed by “34”, is “Innocent Man” the second track and personally my favourite that Burna Boy and DJDS share with us. At first listen the user is greeted with a deep and hard-hitting piano beat that carries out through the entire track, on this song he goes off with a fast flow around the 50-second mark, this compliments the background vocals and hard beat almost perfectly, until he switches up the flow again to go with the beat.

On his third track “Darko” he turns to his Nigerian roots for a medium-paced ethnic sounding piece that can’t be easily replicated due to its original feel.

Lastly Copper & Steel closes off with “Thugger”, a slow-paced echoey song with dark lyrics of his past drug-dealing life he used to live, along with explaining his come-up into the music industry.

Overall, this is a well put-together EP, I hope that we can see more of  Burna Boy and DJDS in the future as the sound together is the almost ideal and perfect vibe I was hoping for.

The Spill Magazine is a Toronto-based online publication dedicated to covering the independent music scene with a strong focus on our thriving hometown talent. Our writers bring you up-to-date news, in-depth features on musicians and reviews for the latest CD releases. We also travel to the front lines for all local festivals including Canadian Music Week and North by Northeast. Don’t forget to check out our Facebook and Twitter pages for all daily Spill updates.
RELATED ARTICLES
album reviewalbum reviewsatlantic records
9.0