SPILL FEATURE: IF IT AIN’T BROKE….. AN INTERVIEW WITH JIMI BELL – GUITARIST FROM HOUSE OF LORDS/MAXX EXPLOSION 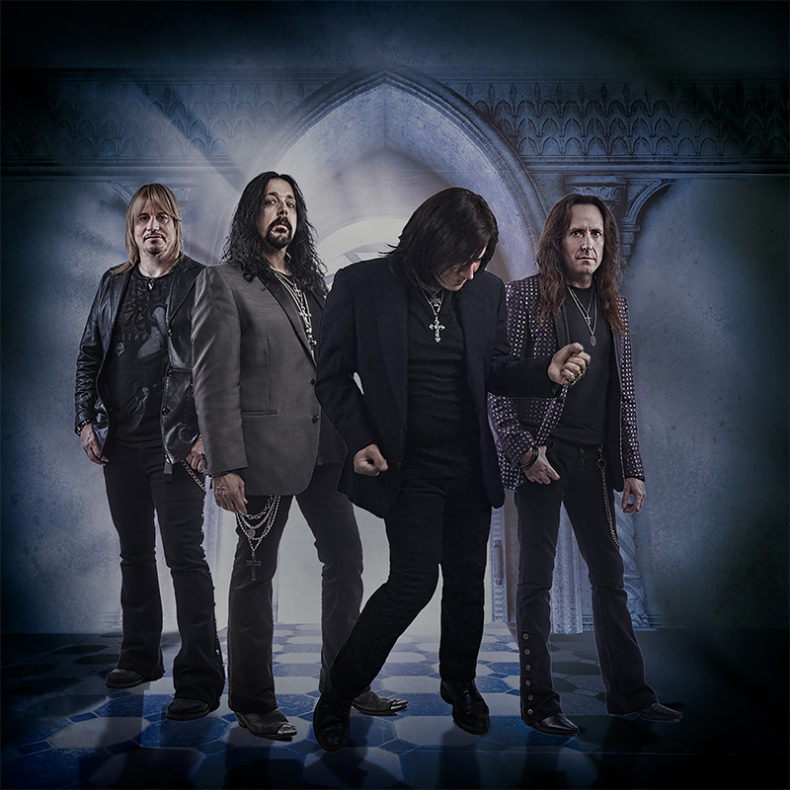 Saint of the Lost Souls is House Of Lords’ tenth studio album, following up the highly successful Indestructible. The band continues to get even stronger with each release. Recorded and produced by the band’s singer and mastermind James Christian, the latest collection of songs has an incredible flow of up-tempo and mid-tempo rockers mixed with power ballads, which lean a bit more toward keyboards this time around, but without compromising the band’s trademark sound which is based around Jimi Bell’s guitar. I had a recent opportunity to chat to him.

Jimi opened by revealing that he played a lot of instruments in his past before he decided to make the guitar his weapon of choice. Stand-up string bass in school, trumpet and keyboards were also dabbled with before he became a drummer between the ages of ten to thirteen.  He grew up listening to big band music. The Glenn Millar Orchestra and Benny Goodman was the music of choice for his mother who actually used to guest sing with bands playing live. He had a great liking for that particular musical style. One day however, there came that epiphany moment while jamming drums with a group of friends in the early seventies. A guy left his guitar at his house, he turned on that electric guitar and that was it – a life changing moment.  ”That changed my life”. Along with the first record that changed his life which actually was a Johnny Winter Band record a live album which featured Rick Derringer on it. Jimi referred to that particular guitar playing as “even to this day, it still blows my mind”. Next for Jimi he discovered the playing of Richie Blackmore, who became his idol for years and also the jazz player Al Di Meola and he subsequently created his own style from that. He appears to have had quite a range of diverse musical influences throughout his life.

House of Lords were an already established band when Jimi joined. They had hit a commercial peak of success in the MTV eighties era at a time when rock was very much in vogue. I questioned Jimi if that presented a problem for him initially when he joined, in that he had to try to integrate both personally and also musically into an already established musical force. Jimi stated that when he had been contacted by James Christian, he had asked him if he had experience in writing melodic rock songs. Explaining,  that he wished to do a record that was similar stylistically to the bands previous releases. Jimi had no previous experience in that field but at the same time did not wish to lose the opportunity that had been presented to him. Bending the truth completely he stated that he had. He was still pleased with the writing on his debut House of Lords album but also paid homage to the creative talents of James who he described as “having the amazing knack of taking the heaviest guitar riff and turning it into a House Of Lords song.  Stepping into House of Lords Jimi pointed to an amount of uncertainty before he and Bj Sampa joined. The band had recorded one album Power and the Myth which had changed direction but was not popular with their fan base. Not only had the band incorporated three new members but there was additional pressure that they had to produce a quality first record. The fans also accepted the product of the new line-up.  Jimi was already familiar with the band before joining but saw no need to go and listen to their back catalogue-preferring instead to let things develop organically in the creative process. He was additionally helped by knowing James Christian even before House Of Lords had formed-so that close personal connection was already established as the two musicians played the same live circuit. The writing process still continues to surprise Jimi,as they all write separately and never in the studio together. ”One of the best things is when a song comes back after he has done the vocals/keyboards and everything. That is always the real treat right there”.  Even though however James is the main guy and the prime mover.  Jimi was also keen to emphasize that the rest of the band still had a lot of creative input .Jimi himself handles the majority of the writing and comes up with song foundations. He presents the ideas to Bj who in addition to also being a songwriter is an arranger. From there he gives his input and then they decide together how to progress next with the idea. They develop it until they feel it is a complete song then they record it but not as a demo but as a final product. They take the time to record the song as if that was what they were going to include on the album. Then it gets sent down to James,for him to personally add the fairy dust. That has been the same process for each House Of Lords album release. Essentially they have found what personally works for them as the old saying goes.  ”if it ain’t broke……”. Outside of House Of Lords I noted that Jimi was always creating music, always doing different things.  However he was keen to stress that he saw House Of Lords as his “full-time job” or main project.

Did the fact that the music industry had completely changed its structure require Jimi to work so much with these other projects  to have a sustainable standard of living. Jimi  agreed that when House of Lords as a band were not working themselves all the other individual band members also did other music and other things. They do whatever it takes to perform constantly. They don’t have 9-5 jobs so they do anything musically oriented as much as they can to make a living. He did admit however that “it is more difficult”.  He has a strong work ethic rising early, and playing guitar from 7.30-8am each day. He still practices daily.

Outside House of Lords I wondered if Jim’s industrious career had led him to work with any musicians in particular that had inspired him. He shared the story of his audition for Ozzy Osbourne back in 1986, where he finished as runner up to Zakk Wylde who got the gig in the final running. Rather than actually damaging him and providing a massive career knock back he spoke positively of the experience. As a direct result he got connected with legendary bassist Geezer Butler (Black Sabbath) and went on to work with him. He spoke highly of that describing Geezer as “an outrageous musician” and “a true talent”. His life had been enriched by the experience as a long-standing Black Sabbath fan.

We had touched on changes in the music industry over the years. I had generally received mixed feedback from other musicians that I had interviewed on the new phase of fan-funded schemes. I was particularly keen to hear Jimi’s views on these. He explained that any bands he was involved in didn’t do that, but he stated that it was up to others to do what worked best for them in their own individual situations. He did admit that he wished House of Lords played live more often but unfortunately it doesn’t work out that way. They have hooked up with a new Talent Agency which they previously didn’t have, and they have secured a few things with them. Tour packages with several bands of a similar musical genre seemed to be increasingly popular and Jimi indicated that House of Lords had also had benefited more from touring in that format. It introduced the band to a larger audience and they had also several festivals lined up including Hair Metal Heaven in the UK at the end of August.

Viewing his musical career in hindsight Jimi indicated that he had experienced some disappointment. The Ozzy audition of course being one. Regarding a former band, Silent Forces that were let go by a label after appearing in a movie with Michael J Fox and Joan Jett and then their manager left suddenly. Jimi preferred to view those in a positive light. It is those things that keep me driven” He stated that he was personally very proud of what he had achieved over his career including some things that he barely can even recall playing on. As an explanation for the enduring appeal of melodic rock, he stated, ”Melodic Rock has a lot of character to it, ever since I started writing this music I realized that I enjoy it because I don’t have to sacrifice heavy guitar riffs to play melodic rock songs. I had a different idea what melodic rock was, when I first heard the term. I thought that it was all very light music .I don’t compromise any of my guitar riffs that I play. I am very happy writing what I do and it still gets accepted as a melodic rock song.”

I'm a 40 + music fan. Fond mostly of Rock and Metal my staple-musical food delights. Originally from Northern Ireland I am now based in the UK-Manchester. I have a hectic musical existence with regular shows and interviews. Been writing freelance for five years now with several international websites. Passionate about what I do I have been fortunate already to interview many of my all time musical heroes. My music passion was first created by seeing Status Quo at the tender age of 15. While I still am passionate about my Rock and Metal I have found that with age my taste has diversified so that now I am actually dipping into different musical genres and styles for the first time.
RELATED ARTICLES
featuresfrontiers music srl