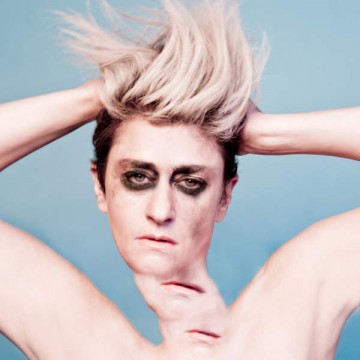 Peaches
Rub
I U She Music

Are there no nice Canadian Jewish girls out there? Merrill Beth Nisker a.k.a. Peaches does her best to explode this stereotype with her sexually-charged themes and lyrics.  And what the hell is Feist of “1234” fame doing with this bad girl? Turns out Feist was a roommate of Peaches and worked backstage at their shows and called herself “Bitch Lap Lap” while doing so.  In addition, Feist is featured and credited on the last track, “I Mean Something”.

But hey, if rappers can sing about doing it in the bathroom, why can’t women? Peaches doesn’t mind kissing and telling. Peaches creates a vision of a seedy underworld where her narcissistic sexual desires need to be fulfilled- whether it be with a man, women or with someone in-between. Check out the song, “Rub” and see what I mean.

Peaches’ electro-humping music is filled with blatant messages of sexual gratification and intimidation, which makes this album amusing for the first few listens.

Peaches likes to have fun and tells you how to make sure she does.

An educator who also tries to introduce others to great music. It's a never ending job.
RELATED ARTICLES
album reviewsmerrill beth niskerpeaches
8.0