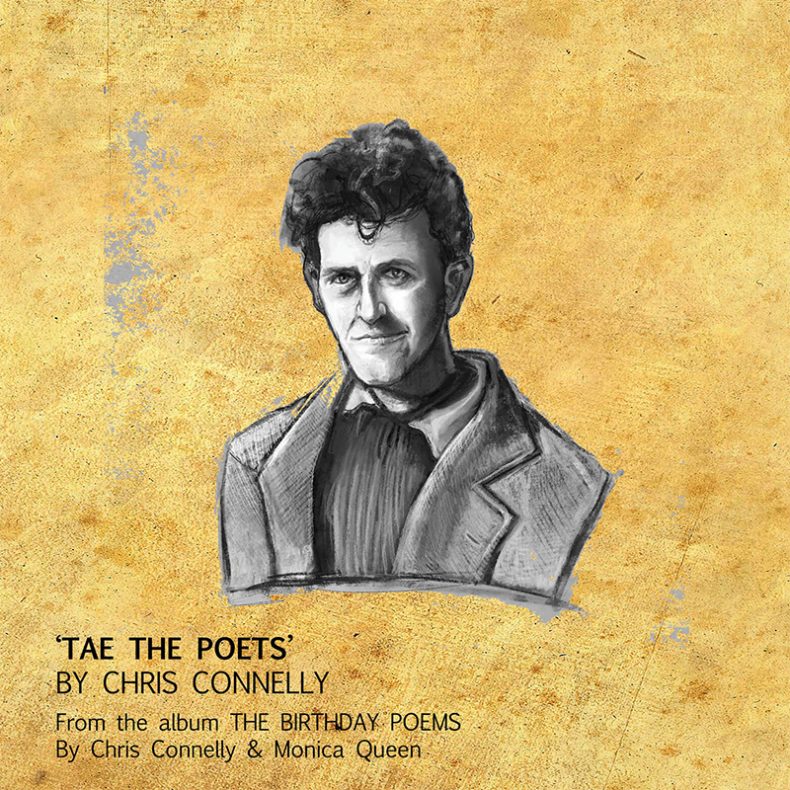 While many music fans may associate Scottish alternative music legend Chris Connelly with industrial and post-punk music due to his extensive and enduring involvement with the likes of Ministry, The Revolting Cocks, to name but a few, today we are pleased to unveil a track from another project he has on the one – one that is very different than that persona and much closer to other pensive singer-songwriter artists as Leonard Cohen, Nick Cave, Lou Reed and Scott Walker.

But Connelly is not alone in this mission – he is joined by vocalist Monica Queen for a new 18-track album The Birthday Poems with a twist. This colossal effort constitutes an exploration through history – namely, it presents a fictionalized account of the romance between Scottish personalities Stella Cartwright and George Mackay Brown and their friendship with Stanley Roger Green.

The first song to be revealed from this album, to be released via Jnana Records, is “Tae The Poets”. This clever video was filmed on location at Chicago’s GMan Tavern and created by Derick Smith and Matt Walker (who is also drummer for Morrissey, Garbage, Smashing Pumpkins and Filter).

This track has a feel good rating of 10, while actually capturing a point in Scottish history that few know about. Who are these personalities that inspired this album? Track by track, Queen and Connelly shall unveil why this story is so captivating and motivating. What we can say for now is that this track is brilliant and a delightful surprise. It has us eager to hear more from this duo, willing to learn as the reveal these highly relevant personalities in Scotland’s recent history.

About “Tae The Poets”, Connelly says “A very shy George would visit the Rose Street bars of Edinburgh and nurse a pint, hoping to meet his poetic heroes. When invited to join the throng one night by Sydney Goodsir Smith, George, cripplingly shy, did not accept the offer. It would take a little time, and a few more pints of McEwan’s Heavy, before George became a part of the group himself.”

With 2021 being the 100th birthday of Orkney-born poet George Mackay Brown, this album represents a sometimes overlooked but very important part of Scottish culture. Named for the poems that George would write for Stella every birthday until she died, The Birthday Poems album is a song cycle based on the relationship between celebrated Scottish poet and author George Mackay Brown and his muse Stella Cartwright. It also addresses the platonic relationship between Stella and the Edinburgh born poet Stanley Roger Green, spanning three decades (from the mid 1950s until Stella’s tragic and untimely death in 1985). 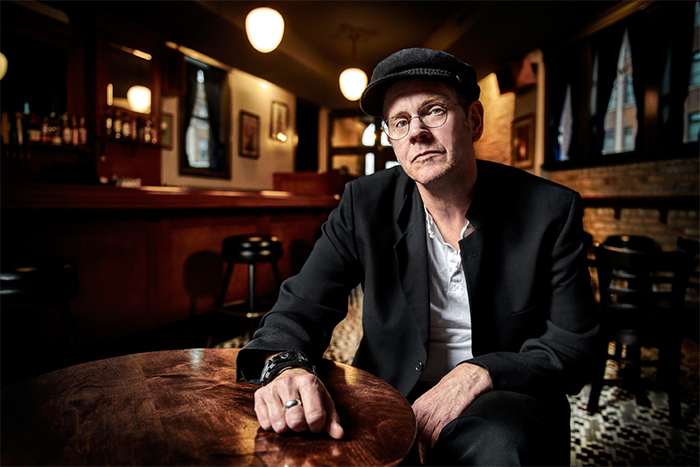 Stella started going out with Mackay Brown, with whom she had a deep relationship that turned into a friendship that endured from the 50’s until her death in the ’80’s. It was not always a happy one – neither of the pair were particularly happy, and their love of whisky did not help.

“While she had relationships with many of the poets who would haunt the bars of Edinburgh’s Rose Street during the ’50s and ‘early ’60s, her love of literature, art and culture was insatiable, she was never given credit or encouraged in her own art and expression. I hope that this album illuminates the beautiful treasure that she was, and how hugely significant she is to Scottish literature of a certain era. As a child and younger man in Edinburgh, I walked the same streets, drank in the same bars and walked the same hills. I was also lucky enough to be close friends with Stanley Roger Green’s children, who, highly creative in their own ways, greatly informed and inspired my life,” says Chris Connelly.

This album is produced by 30-year Connelly collaborator Chris Bruce, a long-time musical partner and band member of Meshell Ndegeocello, who has also worked with Seal, Aaron Neville, Bob Dylan, The Waterboys, My Brightest Diamond, Cheryl Crow and Sam Phillips, amongst others. This album also features strings by Dave Eggar and sax by Levon Henry, as well as contributions by Blake Collins and Phil Faconti.

While Monica Queen may have fronted early 90s band Thrum and released a couple of mellow, introspective albums under her own name with her partner John Smillie, she has gained a reputation as Glasgow’s guest vocalist of choice. Her formidable voice is now familiar all across the music scene thanks to her vocal turn on Belle & Sebastian’s much-loved “Lazy Line Painter Jane” single.

For Chris Connelly, art only moves forward. For almost forty years, he has completed creative pieces ranging from the triumphant to the tragic, from the humble to the hilarious – each time promptly moving on to seek his next inspiration.

Since his nascent beginnings with FiniTribe in his native Edinburgh, Connelly has in excess of twenty solo releases, impressing with their beauty, diversity, earnest intent and wit. He is also a frequent and keen collaborator with other musicians, building on long-established projects with Ministry, The Revolting Cocks and Pigface by evolving and contributing to newer collectives such as Cocksure and The Joy Thieves.

As an explorer of art as a broader endeavour has also issued four books, encompassing the realms of poetry, autobiography, and fictional narrative. For Connelly and Queen alike, The Birthday Poems project feels like the beginning in such an exciting way.

As of May 14, “Tae The Poets” will be available everywhere digitally, including Apple Music and Spotify. The full album The Birthday Poems will be released on June 15, and can pre-ordered at www.thebirthdaypoems.com.

To celebrate the release of this album, Connelly will perform a short run of limited-seating shows in Chicago, two of which have already sold out. ‘An Evening with Chris Connelly’ will feature performances of songs from The Birthday Poems, as well as stories associated with Connelly’s discovery and investigation of the relationship which inspired the album. An online event is also in the works. Links to all events can be found at www.thebirthdaypoems.com.

by SPILL NEW MUSIC on September 12, 2022
CHRIS CONNELLY – “EULOGY TO LENNY BRUCE” A SPILL EXCLUSIVE MUSIC PREMIERE For music lovers who were born in the past few decades and have not trekked backwards to discover the greatness of music eras past, they are certainly [...]