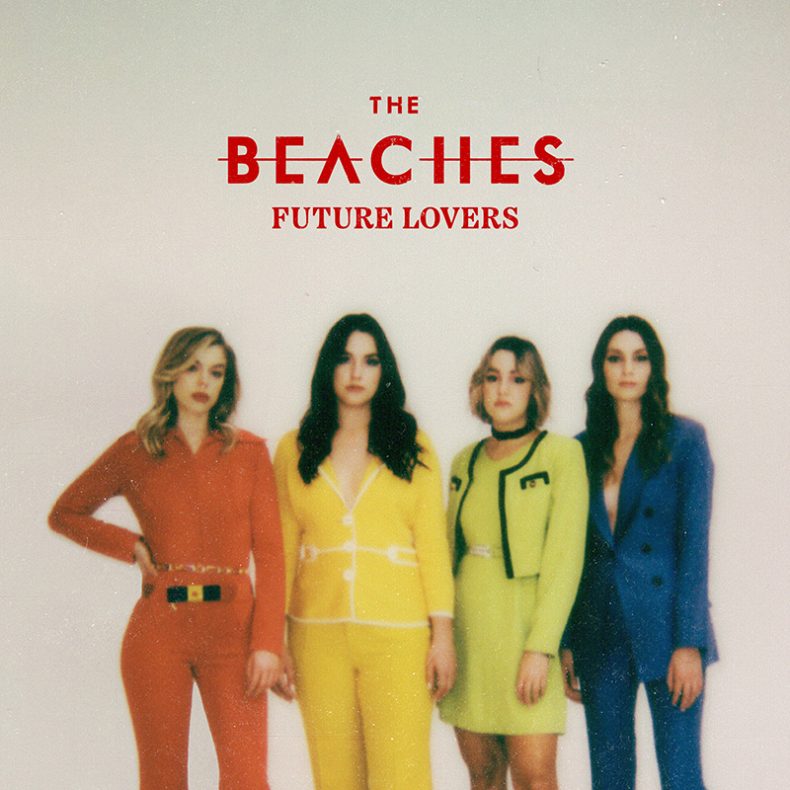 JUNO Award-winning rock band The Beaches announce the release of their upcoming EP, Future Lovers, on May 14 via Universal Music Canada, the country’s leading music company.

The anthemic “Let’s Go,” the first song off their new EP, comes on the heels of the group’s latest chart-topping alt hit, “Lame,” from 2019’s The Professional.  The Beaches’ 2019 collection spawned four hit singles and topped Canada’s Alternative Radio Chart twice with “Want What You Got” and “Lame,” the latter topping the chart for an impressive six weeks.

Produced by Jacknife Lee and written by all four band members with Jacknife and longtime collaborator Coco Morier, Future Lovers delivers quintessentially impressive musicianship and songwriting, complemented, as always, by the killer vocals and whimsically acerbic lyrics The Beaches are known and loved for.

“We recorded most of Future Lovers in Los Angeles with Jacknife during The Professional sessions,” said The Beaches lead singer Jordan Miller. “But the pandemic gave us the opportunity to look at some of these songs and give them some new Beaches twists before they were released… You know, we’ve kind of all matured a little being stuck at home for over a year.”

Future Lovers follows The Beaches’ last EP, The Professional. Released in 2019, The Professional saw the group continue to evolve as songwriters and musicians, working again with their constant-collaborator, renowned producer Garrett “Jacknife” Lee, whose previous collaborations include U2, The Killers, Bloc Party, Snow Patrol, and Taylor Swift. The band’s highly successful 2020 The Professional Tour travelled across Canada, culminating with three of their 15 sold-out shows at The Danforth, in The Beaches’ hometown of Toronto.

Named appropriately after the Toronto neighbourhood they all hail and hang in, The Beaches are authentically rock ‘n’ roll. Their ’70s aesthetic, unapologetic attitude and electrifying sound all fit harmoniously in a modern rock context. Comprised of sisters Jordan and Kylie Miller (on lead vocals/bass and guitar, respectively), Eliza Enman-McDaniel (on drums), and Leandra Earl (on keys and guitar), the band has a natural kismet that shines through on each track and in their live performances. The Beaches have become one of Canada’s top acts with a global reach, placing them in a modern and future context where rock prevails and marking them one of this generation’s most promising young rock groups.

Since their sizzling major label debut in 2017 with LP, Late Show, produced by Metric’s Emily Haines and Jimmy Shaw, the quartet has accumulated an array of impressive highlights. To this day, Late Show‘s singles remain fan and Rock radio favourites. The album’s first single, “Money,” secured the No.1 spot for three consecutive weeks and the infectious track “T-Shirt,” which spent nine weeks on the Billboard Rock Chart, recently became Gold Certified in Canada. With five Top 5 Alt Radio singles, a JUNO Award for Breakthrough Group of the Year, opening tour spots for icons like The Rolling Stones and The Foo Fighters, and much more – this is just the beginning of what The Beaches have in store. “T-Shirt,” “Fascination,” and “Snake Tongue” remain regular recurrent tracks on Canadian Rock Radio today.

Gaining recognition from the world’s most renowned artists, including the likes of Elton John, who has proclaimed: “Love them, love them, love them!”, The Beaches are back and have no plans to slow down. And when touring comes back, expect The Beaches to hit the road hard. Stay tuned for much more to come in 2021.

SPILL NEWS strives to keep our readers up to date with news and events in the music industry. We keep you informed of the most recent information regarding new releases, tour dates, and information items about your favourite artists.
RELATED ARTICLES
let's go!newsthe beaches