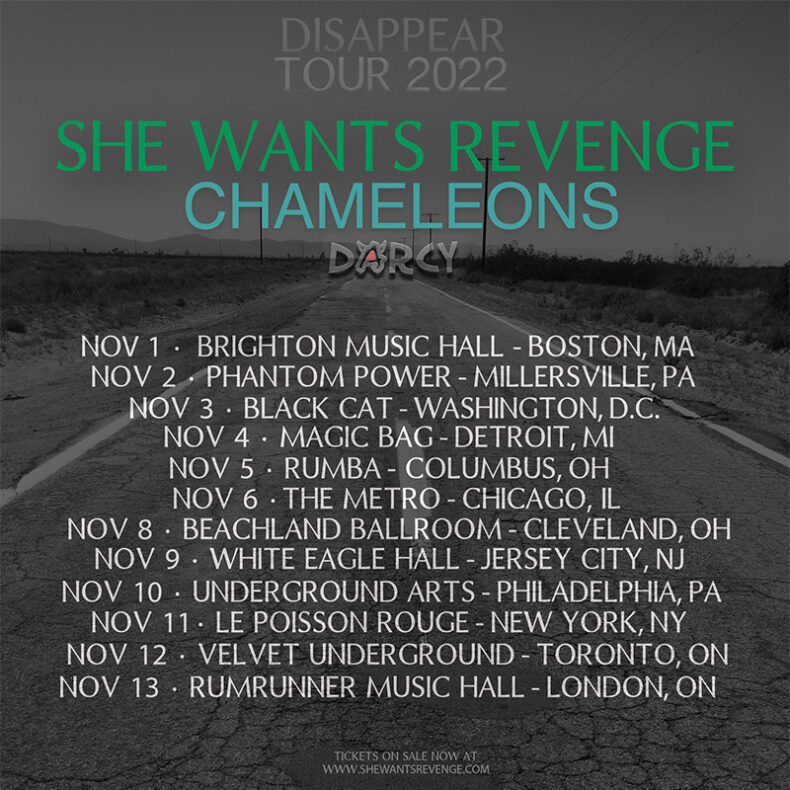 SHE WANTS REVENGE ANNOUNCES FALL TOUR WITH SUPPORT FROM CHAMELEONS

With their triumphant return not only to the stage but also with the promise of new music to come, Los Angeles’ SHE WANTS REVENGE has announced a Fall tour with support from legendary post-punk Manchester band CHAMELEONS. “It’s amazing,” says vocalist Justin Warfield of their upcoming tourmates. “Since the beginning we’ve had the good fortune to play with bands who we love and who influenced us. So to share the stage with them is incredible. It’s going to be a deep, beautiful night of music and we can’t wait.”

Currently touring the Western half of the U.S., She Wants Revenge will head across the Atlantic to play a round of dates in the UK and Europe ​before returning ​for ​a round of dates in ​the Eastern half of North America, kicking off on Nov. 1st at Boston’s Brighton Music Hall and concluding in London, ON at Rumrunner Music Hall on Nov. 13th. “Being without live music for such a long stretch during the pandemic was devastating not only as a fan, but also as a musician,” Justin states. “When it was finally safe enough to unmask and play with friends in a rehearsal room, it was amazing, but it still wasn’t the same as the unpredictability and energy of a real show.”

In addition to the core duo of Justin Warfield and Adam Bravin, the band which formerly performed live as a four-piece has now expanded to five. “The new lineup is myself on vocals and guitar, Adam on synths, keys, samples and effects, Thomas Froggatt (who formerly played guitar) on bass, Spencer Rollins (a longtime creative associate and friend of the band) on guitar, and David Goodstein (a good friend of ours who’s done session work for both Adam and me) on drums. It’s the first time we’ve been a 5-piece, and the energy, musicianship, and vibe are really exciting, and I think fans of the band will be very pleased.”

Having exploded on the scene in 2005 with their evergreen hit single and dance floor classic “Tear You Apart,” which brought the band a massive audience and supporting slots for Bloc Party, Depeche Mode, Psychedelic Furs, co-headlining with Bauhaus’ Peter Murphy, and a headlining Coachella slot alongside Daft Punk, the musically formidable band exploded in the alternative scene with a handful of singles including “Out Of Control” and “These Things” just as streaming dramatically reshaped the industry. Persevering and collaborating with Timbaland, making videos with Shirley Manson and Joaquin Phoenix, She Wants Revenge flourished in the post-punk world while running counter to their dance punk and emotionally distanced contemporaries by keeping their heart-on-sleeve lyricism front center, amassing a loyal international fan base which continues to grow to this day.

SPILL NEWS strives to keep our readers up to date with news and events in the music industry. We keep you informed of the most recent information regarding new releases, tour dates, and information items about your favourite artists.
RELATED ARTICLES
downwriteeverything to mejustin warfield