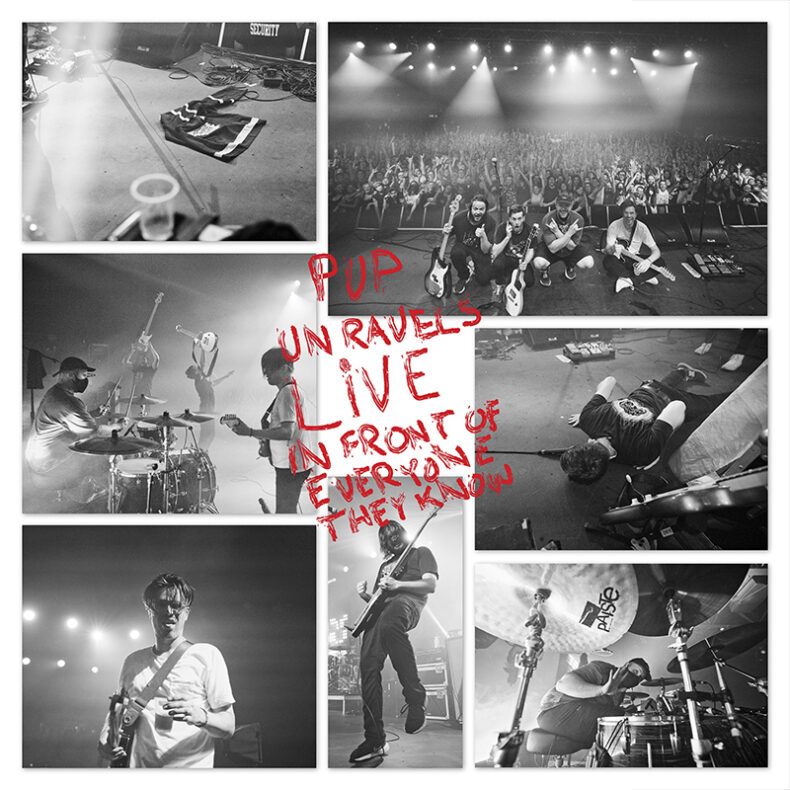 Toronto punk heroes PUP— comprised of Stefan Babcock, Nestor Chumak, Zack Mykula, and Steve Sladkowski— released their incredible, ambitious and aptly titled fourth album, THE UNRAVELING OF PUPTHEBAND, earlier this year. The record earned universal acclaim, countless Top 10 Billboard chart positions including #1 Heatseekers, Top New Artists Albums and Alternative New Artist Albums, and a slew of sold-out shows. They recently announced a live EP out on October 12 entitled PUP Unravels Live In Front Of Everyone They Know, which features tracks off of the new album and was recorded across multiple shows in the band’s hometown of Toronto earlier this year. Today they share two new songs off the EP, “Four Chords” and “Totally Fine”.

“We’ve been starting most shows the same way as the record – with me playing ‘4 chords’ on my own on my little microkorg, “ says Stefan Babcock. “It starts really quiet and everyone is staring at me and I always fuck it up and it’s great coz the show can only go up from there. I love going from a sloppy low key  song to a tight loud ripper. It’s the two extremes of PUP, and we like everyone to know what they’re getting into when they put on a record or come to a show.”

THE UNRAVELING OF PUPTHEBAND was recorded and mixed over the course of five weeks in the summer of 2021, in GRAMMY Award-winning producer Peter Katis’ bat-filled mansion in Connecticut. Full of typically furious, ridiculous and anthemic songs, the recording process allowed PUP to push themselves further than ever before. With more time in the studio, they were able to craft their songs sonically in a way they were unable to in the past, and allowed themselves to incorporate new instruments like piano, synths, horns, and more for the first time. Though made in madness-inducing isolation (aside from Peter and the bats, of course), PUP were remotely joined on the album by Sarah from illuminati hotties, Kathryn from NOBRO, Mel from Casper Skulls, and Erik from Remo Drive. The result is not just the next PUP record, but the *most* PUP record.

SPILL NEWS strives to keep our readers up to date with news and events in the music industry. We keep you informed of the most recent information regarding new releases, tour dates, and information items about your favourite artists.
RELATED ARTICLES
20 buck spinnewsnobro
8.0

by Ryan Ruple on November 9, 2018
Ulthar Cosmovore 20 Buck Spin The San Francisco Bay Area has produced no shortage of exceptional death metal acts in recent decades, with an annual three-day festival solidifying their place in [...]
5.0