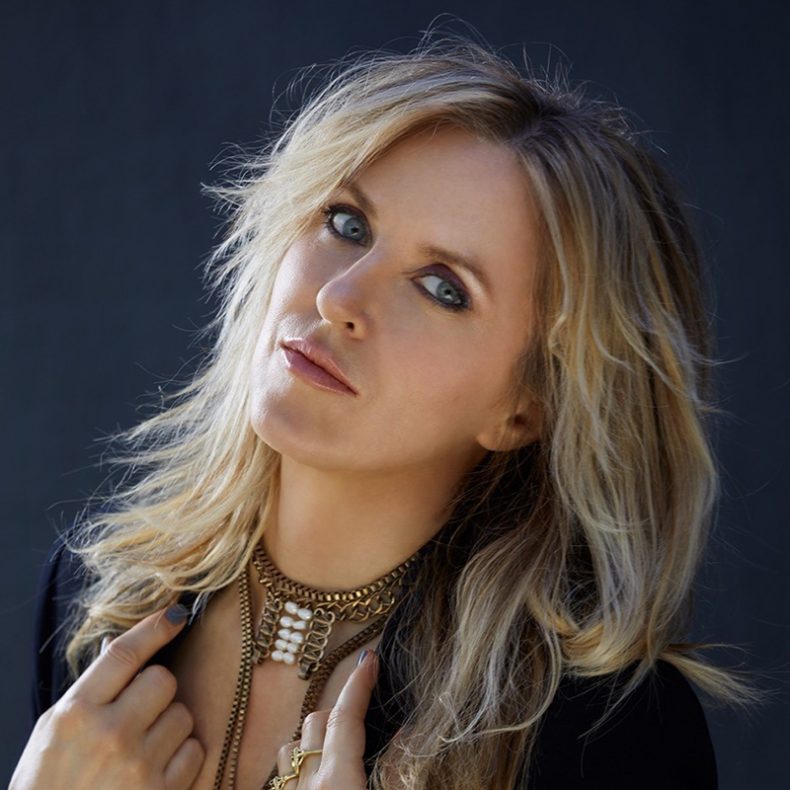 “Spanish Doors”, the album’s opening track, is available to hear now. Phair describes the song as being “about the fracturing of a beautiful life, when everything you counted on is suddenly thrown up for grabs.” She explains, “I drew inspiration from a friend who was going through a divorce, but the actions in the lyrics are my own. I relate to hiding out in the bathroom when everyone around you is having a good time, but your life just fell apart. You look at yourself in the mirror and wonder who you are now, shadows of doubt creeping into your eyes. Just a few moments ago you were a whole, confident person and now you wonder how you’ll ever get the magic back.” The inventive musical sections vault over each other in an exhilarating rush and the contradictory emotions in the layered vocals speak to a universal truth that when bad news arrives, it never picks a good time.

Almost thirty years since her peerless debut album, Exile In Guyville, was released (voted #56 on Rolling Stone’s 2020 list of the 500 Greatest albums of All Time), Phair returns with a new record that will both intrigue and satisfy her long-standing fans, and introduce her to a smart young audience whose contemporary heroes have been reading from Phair’s playbook since they first picked up a guitar.

Liz Phair has achieved the kind of status in her industry rarely bestowed on recording artists. Her albums in the 1990s were central to the indie rock canon of the day. Her image was featured in countless magazines, early Apple commercials and Gap ads. Her eponymous album for Capitol Records in 2003 took Phair in a pop direction that ruffled some critics’ feathers but nonetheless went gold, galvanizing a host of new fans, particularly among young women who fell in love with hits like “Why Can’t I” and “Extraordinary”, tracks that were featured in several major films and TV shows, including 13 going on 30, Raising Helen and How to Deal. Liz has picked up two Grammy nominations, and a spot in Pitchfork’s “Greatest Albums of the 90s” with over five million record sales to date (including three U.S. gold albums). She sang “God Bless America” at the opening game of the Chicago White Sox World Series victory in her hometown in 2005.

Her acclaimed memoir, Horror Stories, published by Random House in 2019, was an insightful, passionate and no-holds-barred look at the life of a singular woman who has been disrupting and influencing since she knew the meaning of the words. The New York Times, The Boston Globe, NPR and the Wall Street Journal championed her first foray into prose. She’s a guitar player who’s created her own voicings and structures; a feminist trailblazer; a composer for film and TV; a visual artist; a lyricist of brutal honesty and devil-may-care insouciance.

Soberish is a portrait of Phair in the present tense, taking all of the facets of her melodic output over the years and synthesizing them into a beautiful, perfect whole. She’s at the top of her game in the recording studio, drawing upon years of experience in television composition to weave through the songs daring and unexpected sound design. With Brad Wood’s exquisite engineering and masterful production, the result is a wholly fresh yet satisfyingly familiar sound that challenges on the first listen and seduces with each subsequent play through. The earworms are strong with this one!

Phair says, “I found my inspiration for Soberish by delving into an early era of my music development, my art school years spent listening to Art Rock and New Wave music non-stop on my Walkman. The English Beat, The Specials, Madness, R.E.M.s Automatic for the People, Yazoo, The Psychedelic Furs, Talking Heads, Velvet Underground, Laurie Anderson, and the Cars. The city came alive for me as a young person, the bands in my headphones lending me the courage to explore.”

None of the arrangements on Soberish are traditional songwriting standards, but the hooks are so catchy, the imagery so compelling, that the listener is drawn effortlessly along with the music. There are the off-kilter, unexpected guitar chords listeners will recognize as her signature style, a mainstay from her earliest work; the instantly knowable choruses of her most pop-friendly songs of the early 2000’s; the frank lyricism and storytelling that has opened doors for countless women picking up guitars and attempting to speak about their experiences.

To look forward, Phair has spent a little time looking back. Looking back at a career that has achieved so much, and with plenty more to come. The celebrated box set reissue of Guvyille and the Girly-Sound tapes back in 2018 acted as a catalyst for Liz to remember what teenage Liz felt when that music was putting her name up in lights. It was a dizzying blur of excitement, fueled by her innate knack for delivering straightforward but devastating, razor-sharp songs. Soberish arrives, shoulder to shoulder with her past work, full of world-weary experience but dancing with a breeziness and brashness that wouldn’t be out of place at any point in her career. From the record’s title track to “Spanish Doors,” “The Game,” ‘Ba Ba Ba,” “In There,” and “Hey Lou”, these hooks and melodies have never come easier for Phair, which is why Soberish is her best and most instantly enjoyable record in decades. Impactful, and with purpose.

Phair shares insight into the meaning of her title: “Soberish can be about partying. It can be about self-delusion. It can be a about chasing that first flush of love or, in fact, any state of mind that allows you to escape reality for a while and exist on a happier plane. It’s not self-destructive or out of control; it’s as simple as the cycle of dreaming and waking up. That’s why I chose to symbolize Soberish with a crossroads, with a street sign. It’s best described as a simple pivot of perspective. When you meet your ‘ish’ self again after a period of sobriety, there’s a deep recognition and emotional relief that floods you, reminding you that there is more to life, more to reality and to your own soul than you are consciously aware of. But if you reach for too much of a good thing, or starve yourself with too little, you’ll lose that critical balance.”

If Liz Phair’s career has had a governing philosophy, we might take it as this: hold to the center, swing around. This return, this new collection of songs, shows her at her finest: playful, inquisitive, uncompromising, but anchored. The center can still hold.

SPILL NEWS strives to keep our readers up to date with news and events in the music industry. We keep you informed of the most recent information regarding new releases, tour dates, and information items about your favourite artists.
RELATED ARTICLES
chrysalis recordsliz phairnews
8.0

by Ljubinko Zivkovic on June 4, 2021
Liz Phair Soberish Chrysalis Records There are quite a few scenarios about what happens when your first record is proclaimed (and actually is) a true classic. Most of them are not so good for [...]